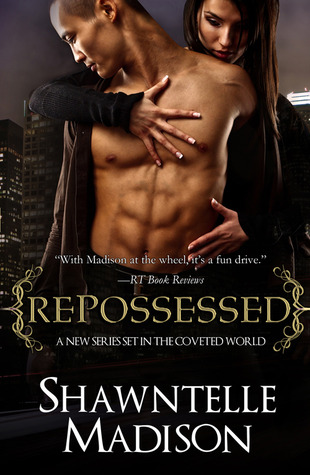 Synopsis: Return to the Coveted universe with a new series featuring witches and warlocks! Supernatural matchmaker Tessa Dandridge knows a little mist here and a little magic there will help reckless werewolves and precocious pixies find love. That is, until her magical Smythe scroll is lost in her repo’ed car and she can’t contact her V.I.P. clients. To connect with an important client cavorting in the fifth dimension, Tessa must depend on handsome Rob Shin, a warlock repo man, to enter Limbo and find her Smythe scroll. Rob has money problems of his own, thanks to the bank determined to foreclose on his elderly aunt and uncle’s home. Repossessing magic wands and cursed pianos from disgruntled warlocks isn’t the best pay, but the Navy SEAL works well as a repo man to pay off his family’s debts. Rob’s repossession jobs catch up with him when a powerful warlock seeks to end his life for his constant meddling, drawing Tessa in the middle.

Review: I really enjoyed the Coveted series, and when I saw that Shawntelle was releasing a new novel, I was impatient to get into it. In addition, the mention of the universe of the first series made ​​me really curious. But this time, no more werewolves but witches and warlocks and two in particular, Rob and Tessa.

We thus discover Tessa, a young woman who runs an agency to help supernatural beings finding love. But whatever everyone thinks, it’s a lot harder than it seems, especially when some clients do not remain in our dimension but in others. For them, no way for a classical communication, but the young woman has a scroll that allows her to contact them. However, when after an appointment, her car is repossessed by a warlock and stored in limbo because of unpaid bills, the young woman finds herself upset. Yes indeed, the scroll was in her car and if she doesn’t retrieve it, she will lose her job. It is therefore imperative that she gets it fast! However, there is only one way to do it and she’ll have to team up with Rob, this man who doesn’t have a respected work. But so you know, he can not reach limbo until he needs to repossess objects. Tessa is going to follow him throughout his days hoping to finally get her things, but everything is much more complicated than expected. Indeed, they may well attract the attention of unsavory people, unhappy to see their belongings collected. But more than that, this woman, who despite her help for love, never had any luck herself and her meeting with Rob could change everything… if he does not break her heart before anything begins.

I confess that, unlike for the other novels by the author, it was a little more difficult for me to get into the story and to hang on the characters and it took me several chapters for the magic to happen. Yet it was quite interesting to see the ideas put forward here in relation to the debts of people. It was something really original and I loved to know how everything was working exactly. Tessa is really determined to recover what she lost despite the dangers, but I must say that despite appearances her life is far from easy and it’s always more complicated. I also loved the interaction she has with Rob but I confess I did not expect the revelations we learn about him. I understood why the yound woman was angry about it. Regarding the warlock, I must say that his behavior bothered me a bit, but the more we advance in the story the more we understand why he did that. It was also quite touching to discover that despite the facade he presents to people, there was more and he would do anything to help the people he cares about.

I must admit that the rhythm is a little slower than what I had the habit of reading but it is certainly a pleasure to try it even if I prefer her other series. I am somehow curious to read more and see how Volume 2 will be thereafter.

8 thoughts on “Repossessed by Shawntelle Madison”