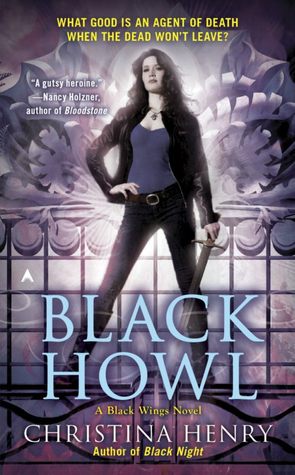 Synopsis: Something is wrong with the souls of Chicago’s dead. Ghosts are walking the streets, and Maddy’s boss wants her to figure out why. At the same time, the pact that Maddy unwittingly made with the local werewolves comes back to bite her when their alpha is kidnapped. As Lucifer’s heir, she should be able to discover who-or what-is responsible for both occurrences, but the fallen haven’t been too happy with her since she agreed to harbor Gabriel’s half brother, Samiel.

And while work is bad enough, Maddy has a plethora of personal problems, too. Now that Gabriel has been assigned as her thrall, their relationship has hit an impasse. At least her sleazy ex-fiance, Nathaniel, is out of the picture-or so she thinks…

Review: I admit that I wanted this book for a while. There are always so many events in the Madeline’s life and I was eager to find out what was going to happen now. I must say she doesn’t have a lot of friends, but if it was not already complicated, some persons would be more than happy to see her dead.

The tension between Maddy and Gabriel is omnipresent throughout the book, as she tries to make him express his feelings while he merely withdraws into himself, something that irritates our heroine at the highest point (and I understand that). All the other characters are also her for us and I must admit that my favorite is Beezle. How not to succumb to this little gargoyle? He is so adorable. Okay he is also very annoying (it’s often like that, right?). He is always devoted to Maddy although a donut can get him to do everything and anything. I think our little gargoyle could be defined in a few words: Ambulant stomach! (yes, it’s true). But I think that we could not do without him, he is an important character for the story.

The plot is also very interesting: Wade and his whole pack disappeared and Jude appears on the Maddy’s front door, asking for help. And of course, to our group is added Samiel, but also Nathaniel, Gabriel and his boss. Ah Nathaniel, what different feelings I had for your character! In the second volume we are surprised to almost like him and I was hoping to love him a little more here but I think sometimes we really hope in vain. But all this will of course add many other problems such as the Samiel’s trial and Lucifer still wants to have his little girl with him. Madeline thinks she is smart enough to thwart his plans, but his grandfather had millennia to practice and I do not think there is one person who can stand in his way. We feel that little by little he will achieve his purpose while she won’t be able to rebel. We can also note that he is also more and more a father to her and it’s really touching to read about each of their meetings.

There are some great progresses in this book and we can see what the punishment of Lucifer are (they are really imagined). We will therefore encounter many surprises full of originality.

Well you understand that I loved this new volume. It is true that I did not expect at all this conclusion. I was quite surprised and even shocked by the events but I realized, however, before Maddy what was going to happen. I do not really know now what will happen to her and those she takes care about now, but I’m curious to read the following events.