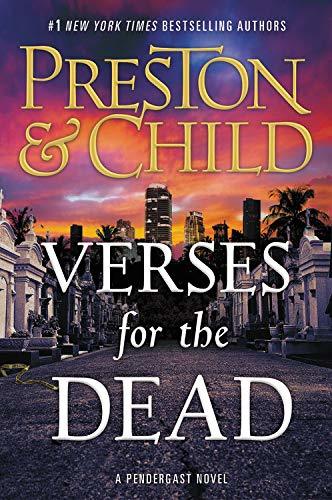 After an overhaul of leadership at the FBI’s New York office, Special Agent A. X. L. Pendergast is forced to accept an unthinkable condition of continued employment–he must work with a partner.

Pendergast and his new teammate, junior FBI agent Coldmoon, are assigned the case of a devious new killer whose killing spree spans the countryside, and whose crimes are distinguished by a mysterious M.O. Letters left at seemingly unrelated gravesites in the city of Miami.

That the connection between these old deaths defies easy explanation is the least of Pendergast’s worries. As Aloysius digs deeper, he soon realizes there may be more to the killer–and Pendergast’s new partner–than meets the eye.

Review: What a pleasure to find a new Pendergast’s adventure! We don’t see Constance a lot this time but our hero will find himself with a new investigation. Unfortunately, this new investigation was accompanied by a new supervisor and, above all, a new teammate present to spy on him.

A person kills young girls to retrieve their hearts and place them on the graves of girls who died several years earlier. Pendergast is on the case but it’s not easy with this new chief who will do anything to bring him down. The case is more complex than expected and his teammate still takes his role as a partner to heart, no matter what everyone wants. What if Pendergast wants to do something that seems completely useless? He’s still taking his side. But that doesn’t prevent him from reporting what’s going on too.

I really enjoyed discovering exactly what was going on with M.O. Letters and I also enjoyed meeting this new woman forensic doctor who had a very nice charisma for the story and I hope we will see her again later too!

This investigation was once very engaging and I was delighted to find our favorite character for a new investigation! Always a real pleasure to follow a Preston & Child novel.