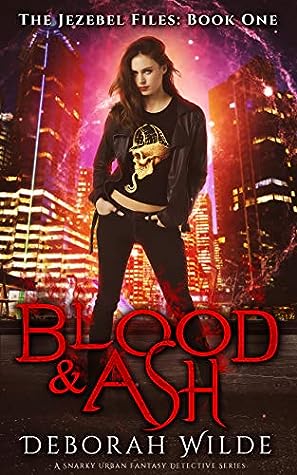 Ashira Cohen takes pride in being the only female private investigator in Vancouver. With her skills, her missing persons case should be a piece of cake.

She wasn’t counting on getting bashed in the skull, revealing a hidden tattoo and supernatural powers she shouldn’t possess.

Or the bitter icing on top: a spree of abductions and terrifying ghostly creatures on a deadly bender.

And don’t even get her started on the golems.

Reluctantly partnered with her long-time nemesis Levi, the infuriating leader of the magic community, Ash resolves to keep her focus on the clue trail and off their sexual tension because WTF is up with that?

But with a mastermind organization pulling strings from the shadows and Levi’s arrogance driving her to pick out his body bag, can Ash rescue the captives and uncover the truth or will the next blood spilled be her own?

Review: Here is an author whose novels I had seen a little bit everywhere and that I was curious to try. Her two urban fantasy series made me want to discover her stories and I had a great time with this novel!

Ash is the only private investigator in Vancouver, but she’s only allowed to investigate high-profile cases. It is completely excluded for her to work on Nefren, the people holding power in society. But then, because of a bad blow on her head, she discovers a tattoo now broken by a scar. Except that the problem is that she didn’t know the existence of this tattoo and now it seems that she has powers that she didn’t even think she had. Powers that shouldn’t exist.

Allying herself with Levi, the man who is her enemy, she’s going to have to try to figure out what’s going on in the city with all these children disappearing and these creatures invisible to everyone but her.

I had a really good time with this novel and I must say that I was curious to witness the interactions between Levi and Ash which were always colorful!

It was a very nice first volume and I’m very curious to read the sequel now!