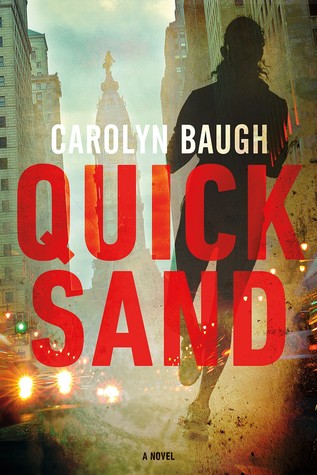 Carolyn Baugh on the origins of QUICKSAND

“My mom has a t-shirt that says, ‘Careful or you’ll end up in my novel.’  That pretty much sums me up: a parasite.  I feed off stories—stories, or settings, or even just an intriguing word uttered here or there.  Additionally, I’ve spent twenty-five years acquiring ninja Arabic skills, and that ability has allowed me access to worlds not everyone gets to tread.  I wanted to pay homage to some of the tough level-headedness I’ve found in so many of the women I’ve come to know, while yet writing some of my own story, while yet drawing attention to some social issues that are deeply important to me.  I get to do all of that with the character of Nora Khalil.

After 9/11, my then-husband was one of many Arab-Americans rounded up in a fishing net of racial profiling.  Upon his release and the government’s apology, a member of the Bureau suggested to me that I become an agent—put my Arabic skills to good use.  Because I was the mother of a two-year- old, it didn’t seem the right path for me at the time, and I chose instead to pursue my PhD and become a college professor.  But entertaining that fantasy is part of the Nora story.  The journey of my daughter, growing up in the United States as the daughter of an Egyptian father, is also part of that story.   Ten years of living in Philly also fed into that story, as well as my ongoing activism in raising awareness about human trafficking.  So, many elements have come together… those who know me well have many moments of recognition as they read Quicksand.  As such, the people in my life are getting very nervous as I write Book Two!”