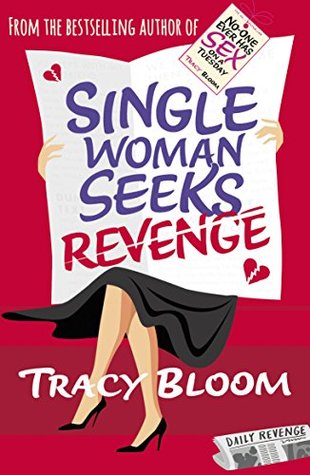 Synopsis: What do you do when you find your love-life in ruins? Get revenge on every man who ever broke your heart of course….

Suzie Miller, a disillusioned agony aunt, can’t believe she’s been dumped from a great height yet again (this time by text, straight after they’ve had sex… twice!). So she decides the time is right to make every one of her exes feel the pain she felt when they carelessly cast her aside.

Her methods are unusual but humiliation on a grand scale is no less than they deserve.

Euphoric that she’s finally stood up for herself she starts suggesting outrageous ways for her readers to deal with their relationship nightmares too. Suddenly everyone wants Suzie’s advice. Finally content with being single and enjoying her blossoming career it seems as though happiness is within her grasp. That is until a man gets in the way.

Single Woman Seeks Revenge is a romantic comedy with a kick: a kick up the backside to any man who believes he got away with treating a woman badly and to any woman who doesn’t fight back.

Review: I wanted something light, and this book was perfect for that!

Suzie is sick of love. Really fed up! Besides, she decided to write an article to show women how to get revenge of men. In doing so, she also decides to get revenge on the men who hurt her. And who better to help her than Dre, her coworker? But if Drew is helping her, he is also dealing with his own problems, including his marriage to a woman he is less and less sure to be in love with.

I had a really good time with Suzie. She takes her mission very much to heart and I loved seeing her ideas for her exes and seeing her act on them. It was also touching to see Drew trying to figure out what he wanted to do with his fiancée, realizing that there wasn’t much between them.

It was a light novel that, as I said, gave me a good time. A perfect story to relax with!