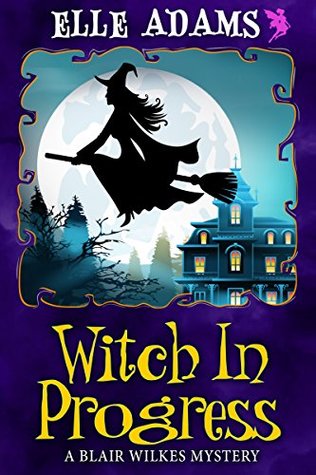 Synopsis: Penniless graduate Blair Wilkes has always felt one step behind everyone else in her life. Unemployed and out of luck, with the uncanny ability to cause havoc wherever she treads, when she receives a job offer from a strange town called Fairy Falls, she’s certain it’s too good to be true.

It turns out Fairy Falls isn’t just eccentric: it’s magical. And so is Blair.

Learning she’s a witch with a never-before-seen talent is just the first in a series of surprises that await Blair, but her new life comes with its fair share of pitfalls. From a hot ex-paranormal hunter security guard to a co-worker with an inexplicable grudge against Fairy Falls’s newest witch, not to mention the mysterious death of a former client, Blair swiftly finds herself overwhelmed. After her magical skill gives her an unexpected lead on the murderer, she finds herself dragged into the investigation.

Can Blair figure out her magical talents before the paranormal killer notices she’s on his tail? Or will her new beginning come to an untimely end?

Review: I’m always looking for a good cozy mystery and all the more so if it’s a paranormal one. So I was delighted to discover this novel.

Blair thought she was just another young woman, but when she gets a call for a job in Fairy Falls, she doesn’t expect her life to be turned upside down to such an extent. A new life, a new start, is that what they say? Well, that’s exactly it for our heroine who knows nothing about the paranormal and yet finds herself in a city full of it. What’s more, everyone thinks she’s a witch. But she would know if she was, wouldn’t she?

It was a nice little novel, quick to read. If I thought it was a bit long, it was nice to follow our heroine and see how she was going to handle it. A whole new world is opening up to her, a world in which she will have to discover the identity of a murderer! And it’s not going to be easy.

A light novel, but I admit that I don’t know if I’ll read the sequel.

7 thoughts on “Witch in Progress by Elle Adams”