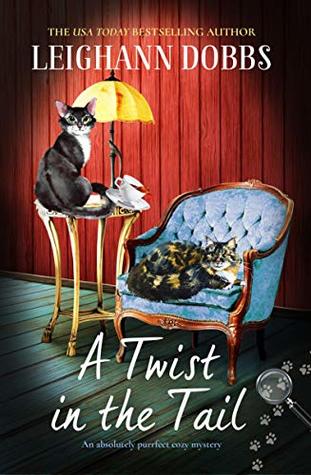 Synopsis: ‘Talk about inconvenient. Not only did I have a dilapidated mansion and no money to repair it with, two cats I had no idea how to care for and a room full of cranky guests waiting for their breakfast, I also had a dead body on my hands.’

Josie Waters has to admit she may have acted a bit hastily when she agreed to purchase the Oyster Cove Guesthouse – a charmingly gabled Victorian mansion on the breathtaking Maine coast – from elderly family friend Millie Sullivan. But Josie was desperate to flee Ohio and in particular her ex-husband, a chef who loved his job so much he left her for it. And anyway, how hard can running a guesthouse be?

The truth is, Oyster Cove Guesthouse is a mouldering money pit with falling-in roof and a cohort of regular guests who are as mischievous as a litter of kittens. And Millie keeps dropping by to dispense unasked-for advice. And Josie might have made a mistake in promising to adopt Oyster Cove’s two resident cats Nero and Marlowe, and treat them in the manner to which they’ve become accustomed. Josie has never had a cat before… let alone two feisty felines who think they own the place.

Ok, it’s not going well. At least it can’t get any worse, Josie thinks. Until her first guest ends up dead.

Review: I was a bit afraid when I started the novel, I always have trouble with stories in which animals have a central place, even more when animals talk even if it’s only between themselves. So I wasn’t sure what to expect, but since I love cozy, I gave it a try and in the end I had a great time.

Josie has taken over an inn, but it is far from easy. There are a lot of renovations to do and money is tight. On top of that, she discovers the dead body of one of her tenants in the condemned wing. What happened to him? And more importantly, why would someone kill him? Josie, her mother and her friend and former landlord Millie are on the case to find out what happened. Not an easy task! Everyone in town seems to be hiding secrets and our trio will try to find out the truth. Fortunately for them, they will be assisted by two cats who will try to make them understand the clues they have discovered.

Well, the cats only talk to each other and try to pass the information to the humans. These parts are quite limited and I thought they were very well done. I am now very curious to discover the second volume to see what the author has concocted for us. And now I want to know more about Mike!

9 thoughts on “A Twist in the Tail by Leighann Dobbs”