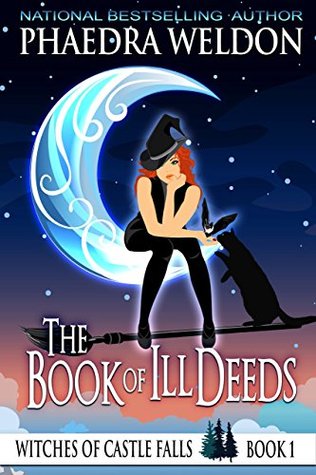 Synopsis: Ginger Blackstone had been looking for a change in her life. Getting a call from her home town’s Sheriff with the message, “We’ve arrested your grandmother for murder,” wasn’t it.

Three bodies later and Ginger finds herself, and the hot new small-town doctor, up to their broomsticks in trouble. Ginger sets out to find the real killer before her missing sister’s name shows up on a list of the dead in The Book of Ill Deeds.

Review: I had this novel on my ereader for a long time and feeling like a little cozy for a good time, I jumped into the first volume.

Ginger has been away from her hometown for several years now, but a call from the town sheriff will upset all her plans: her grandmother has been arrested for murder. It’s a story that turns everything upside down. As the bodies pile up, Ginger joins forces with the town’s charming vampire doctor and an unusual cat who may become her pet to try to find out what happened and who did it.

This was a nice read that I had a good time with. The romance is a bit easy, but that’s not too bad. I was surprised by the culprit at the end. I’m curious to find out what happens next.

7 thoughts on “The Book Of Ill Deeds by Phaedra Weldon”