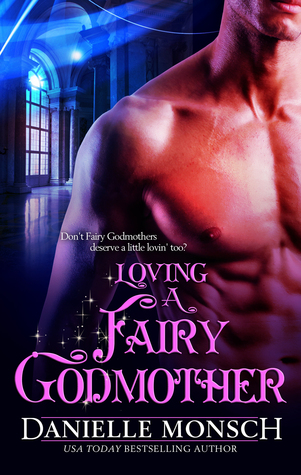 Synopsis: Once upon a Time, in a Kingdom that was just a little twisted (oh yeah, and kinda far away), Fairy Godmothers Rule! Elf Kings drool, and a Knight was having a bad time with a Dragon.

Fairy GodMOTHER. As in female – it’s right there in the name. With those divine dimples, killer blue eyes, and hard muscled body, no one’s going to be mistaking Tiernan for a female anytime soon, but due to a wish gone wrong, Tiernan is now the only Fairy Godfather in existence. Strangely, most Fairy Godmothers don’t have a problem with this change in the status quo… all except the one Fairy Godmother he’d go and win a kingdom for.

Organized, efficient, logical – and happy with the status quo, thank you very much – Reina never liked that Tiernan was allowed in the program. After all, the FGs do not need a stubborn, infuriating, feckless male messing with tradition, and she wants him gone…like yesterday. Circumstances arise that might let her get her wish, but in a way even she never wished for.

Tiernan’s employment status is called into question and he is given the task of getting a woman named Cinderella a Happily Ever After. If he doesn’t, he loses his position as a Fairy Godfather and becomes human again. Unfortunately, becoming human means becoming Dragon chow. So Cinderella will get to the ball and get her Prince if he has to dress her down to her shoes himself, and he’s bringing Reina along to help. After all, who said only mortals should get a Happily Ever After?

Review: I was very curious when I saw this novel. I must say that the mix between fairy tales that we know and godmothers were bound to be interesting. I did not know what format it was, but I was surprised to see that it was a fairly short novel, but it’s also nice because we can read the whole thing pretty quickly.

This story highlights two stories in parallel. First, we have the story of Tiernan revolutionizing the world of fairies as it’s only reserved to women. While he wants to keep this new status and thus at the same time win the heart of Reina, a woman who seems determined to avoid him, he will have to work on his first mission. Accompanied by the young woman so she could help him, they will find themselves in the middle of the Cinderella story to help her to get her Happily Ever After. To make her find her prince and finally be happy.

I enjoyed this story and to follow Cinderella in a few moments of her life. She is a young touching girl, shy and innocent, fun to explore. But of course, everything is actually set from the POV of Reina and Tiernan who turn around each other, facing their feelings and who may well discover in each other something more.

So it was a pretty light novel and I’m curious enough to see what tale will be featured in the next volume.