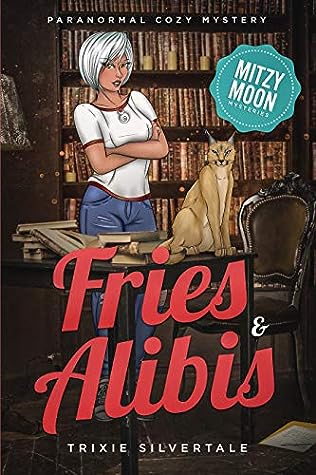 Synopsis: A gift that’s too good to be true. A murder she didn’t commit. A barista in a latte trouble…
Mitzy Moon believes she’s an orphan, so she’s dumbstruck when a special delivery to her low-rent apartment reveals a family. But her shock turns to awe when she discovers her grandmother left her a fortune and a bookshop of rare tomes brimming with magic.

No sooner does she set foot in the quirky village of Pin Cherry Harbor to claim her inheritance, than the handsome sheriff catches her standing over a corpse. Desperate to prove her innocence, she’s forced to accept help from her granny’s entitled cat and a spirit from beyond the grave.

Can Mitzy and her otherworldly helpers uncover the real killer before the long, sexy arm of the law hauls her to jail?

Fries and Alibis is the first book in the hilarious paranormal cozy mystery series, Mitzy Moon Mysteries. If you like amateur sleuths, small town intrigue, and a dash of the supernatural, then you’ll love Trixie Silvertale’s twisty whodunit.

Review: I didn’t know the series or the author, but when I came across this first volume, I was curious to find out more.

Mitzy Moon is broke. She doesn’t have a family anymore: her mother died and she has to fend for herself. But then she is visited by a man who tells her that her grandmother, whom she did not know, has died and that she has inherited a large amount of money as well as a book store. A very nice surprise, but it also brings many questions: Who was her grandmother? Why has her father never contacted her? Who is she really? But as she tries to find out who she is, she stumbles upon her grandfather’s dead body and becomes the number one suspect. Between proving her innocence, discovering the identity of the murderer, getting to know her father, and most importantly, dealing with the ghost of her grandmother, Mitzy will be at a loss.

This was a nice classic cozy, but it’s like a lot of others. I’m not sure if I’ll ever read the sequel, but on occasion why not.