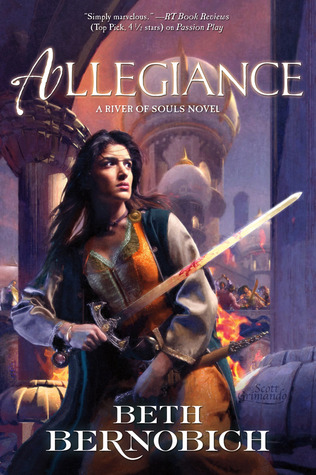 What is it about:
With Leos Dzavek dead and his Council in turmoil, the king of Veraene sees his chance to launch his long-desired war against Károví. Ilse Zhalina and Raul Kosenmark know the people of Károví are not so easily defeated, however. Raul sets off for Duenne to confront his king and retake his place in Veraene’s Court. Ilse Zhalina embarks on the long journey from Károví with a letter vital to their cause of peace. Both of them must beware of Markus Khandarr, King Armand’s most trusted Councilor and Raul’s long-time enemy, who has plans of his own.

What did I think of it:
This is a nice read mostly.

Ilse’s journey is full of danger and treachery and I was rooting for her to get back to Raul. She has to leave some people behind, but meets others along the way. I kept trying to guess who she could trust and who might stab her in the back.

Raul’s storyline is filled with even more intrigue and politics. New to me characters appeared, but from the context of the story I learned they were returning characters from the first book in this trilogy (which I didn’t read). Still I didn’t feel like I missed out on things. There were some pretty intense moments and situations and at times I wondered if this story could have a happy end.

I was a bit disappointed that some characters suddenly disappeared from the story without there being a real conclusion to their storyline, but the story was interesting enough that I didn’t mind too much.

All in all this story was pretty enjoyable and had me invested, until…

Close to the end there was a kind of Deus Ex Machina for something that really annoyed me. I must confess I was close to throwing the book across the room. This event was totally unnecessary in my opinion, and the book would have been much better without it.

With much grumbling I continued to read on and the conclusion of this trilogy is satisfying enough, although that one event colored my remaining reading experience I will confess. (I must add that it might be just me who got really annoyed, others might actually think this Deus Ex Machina is wonderful.)

So in the end I thought this was an enjoyable read until the last few chapters. I don’t think I will reread this series, but I might give another series by Bernobich a try.

Why should you read it:
It’s (mostly) an enjoyable Fantasy read.