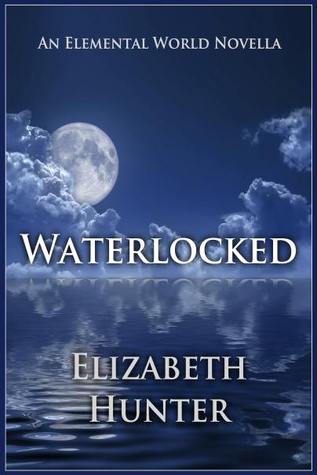 Example: What happens when the water vampire you’ve promised yourself to actually wants you to go through with the wedding? For Gemma Melcombe, her engagement to Terrance Ramsay was a political maneuver. For Terry, it’s something entirely more. Rough waters may be ahead for these two headstrong lovers, but until they come to an agreement, Gemma will be waterlocked.

Waterlocked is a novella in the Elemental World series.

Review: Like for the original series, I always take a great pleasure in reading each new volume by Elizabeth Hunter. All the secondary characters are featured here and after Carwyn, we have now Gemma and Terrance.

This is a fairly short story but still quite complete. So we meet this couple who is engaged by arrangement and while Terrance loves her madly since their first meeting, it is far from being the case for Gemma. But hey, it must be said that she never thought too much about her feelings and she does not like what comes out when she does. However, even if she knew it would happen, Terry asks her to marry him to formalize things but it’s at that moment that our heroine chooses to disagree. Yet yes, she will marry him and perhaps understand later that her new husband is not so terrible than she wanted to think. She will face her feelings and understand that despite what she thought it is more than an arrangement. And while they find themselves on a boat in the middle of the ocean, our two heroes will face their past, will open to each other and face new dangers.

We can read it easily and quickly with as usual a few flashbacks and I really enjoyed learning a bit more about these two characters. All makes me really want to get into the second novel of the series.

For those who do not know that, the first novel in the original series “Hiddent Fire” is free as ebook so do not hesitate!

9 thoughts on “Waterlocked by Elizabeth Hunter”