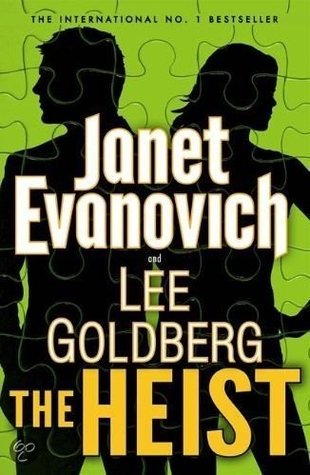 Synopsis: From Janet Evanovich, #1 New York Times bestselling author of the Stephanie Plum novels, and Lee Goldberg, bestselling author and television writer for Monk, comes the first adventure in an electrifying new series featuring an FBI agent who always gets her man, and a fearless con artist who lives for the chase.

FBI Special Agent Kate O’Hare is known for her fierce dedication and discipline on the job, chasing down the world’s most wanted criminals and putting them behind bars. Her boss thinks she is tenacious and ambitious; her friends think she is tough, stubborn, and maybe even a bit obsessed. And while Kate has made quite a name for herself for the past five years, the only name she’s cared about is Nicolas Fox—an international crook she wants in more ways than one.

Audacious, handsome, and dangerously charming, Nicolas Fox is a natural con man, notorious for running elaborate scams on very high-profile people. At first he did it for the money. Now he does it for the thrill. He knows that the FBI has been hot on his trail—particularly Kate O’Hare, who has been watching his every move. For Nick, there’s no greater rush than being pursued by a beautiful woman . . . even one who aims to lock him up. But just when it seems that Nicolas Fox has been captured for good, he pulls off his greatest con of all: he convinces the FBI to offer him a job, working side by side with Special Agent Kate O’Hare.

Problem is, teaming up to stop a corrupt investment banker who’s hiding on a private island in Indonesia is going to test O’Hare’s patience and Fox’s skill. Not to mention the skills of their ragtag team made up of flamboyant actors, wanted wheelmen, and Kate’s dad. High-speed chases, pirates, and Toblerone bars are all in a day’s work . . . if O’Hare and Fox don’t kill each other first.

Review: I love the Stephanie Plum series even if it is true that we now have many volumes. Also, when the author has released this new series, especially in collaboration with Lee Goldberg, author of the Monk TV show (a really nice one), I was curious to see how the first novel would be. I had first read the novella that precedes the novel, but it is true that I had not been so convinced by it. But it was only an introduction, and a complete book usually changes our feelings.

Firstly I must say that this series is very different from the one of Stephanie Plum, but it is true that it is a tone below for me. This does not mean that it was not good, not at all, because I enjoyed it, but it was still a bit more difficult to really get into the story and enjoy it from the start. In the end, however, I can say that it was a nice introduction and I am very curious to read the second book and see what happens to our two heroes. Yes because once they are teaming up, the story becomes truly explosive!

Kate has only one obsession in her life: her work, including Nicolas Fox! This is a man who attracts her and at the same time, he is a criminal that she hopes more than anything to bring to justice! Yet when she finally manages to do that, her purpose is destroyed, and no can can be up to this one. But when she least expects it, Nick fled and against the choice of her boss, she goes after him, only to discover something quite incredible. Indeed, her bosses decided it would be much more interesting to use the man to catch other criminals with his extraordinary talents that brought him in prison. But of course, all that being said, Nick keeps his fugitive status and everyone is still after him. It’s now an undercover mission for Kate. So here they are forced to team up to confuse a very powerful man that no one knows the location. And while Kate remains quite doubtful about this association, we find all the steps necessary to establish such a scam. I was really impressed with everything they had to realize, all the people he had to bring together and all the plans he had to think about, all that for a single event. It was a fabulously organized scam and I loved every minute of it, even if it is true that even when the plan is fully decided, there are still external factors that can change the game at any time.

It is quite difficult at the beginning to really understand Kate, because she seems pretty automated, quite cold and without feelings if it is not question of her hunting. Yet in the course of reading, we discover a few more things about her that allows us to get to know her, even if she always keeps a personality a bit detached. But I think we’ll know more later as she is facing something new. Conversely, we come to understand perfectly that Nick is much more open. It’s quite funny indeed to see the comparison between the two characters as they are completely opposite. We now perfectly understand why their interactions are always interesting.

So it was an enjoyable read and I am curious to know more about it to see what the authors will introduce us for the sequels.

16 thoughts on “The Heist by Janet Evanovich & Lee Goldberg”