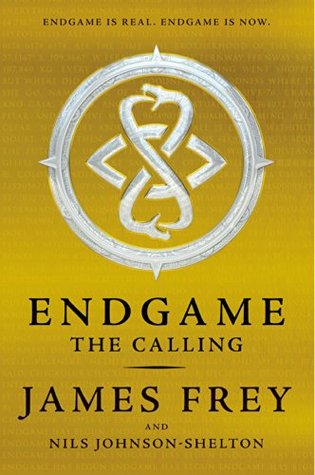 Synopsis: Twelve thousand years ago, they came. They descended from the sky amid smoke and fire, and created humanity and gave us rules to live by. They needed gold and they built our earliest civilizations to mine it for them. When they had what they needed, they left. But before they left, they told us someday they would come back, and when they did, a game would be played. A game that would determine our future.

For ten thousand years the lines have existed in secret. The 12 original lines of humanity. Each had to have a Player prepared at all times. They have trained generation after generation after generation. In weapons, languages, history, tactics, disguise assassination. Together the players are everything: strong, kind, ruthless, loyal, smart, stupid, ugly, lustful, mean, fickle, beautiful, calculating, lazy, exuberant, weak. They are good and evil. Like you. Like all.

When the game starts, the players will have to find three keys. The keys are somewhere on earth. The only rule of their Endgame is that there are no rules. Whoever finds the keys first wins the game. Endgame: The Calling is about the hunt for the first key. And just as it tells the story of the hunt for a hidden key, written into the book is a puzzle. It invites readers to play their own Endgame and to try to solve the puzzle. Whoever does will open a case filled with gold. Alongside the puzzle will be a revolutionary mobile game built by Google’s Niantic Labs that will allow you to play a real-world version of Endgame where you can join one of the lines and do battle with people around you.
Will exuberance beat strength? Stupidity top kindness? Laziness thwart beauty? Will the winner be good or evil? There is only one way to find out.

Review: What a synopsis, isn’t it? I admit that the whole thing is really intriguing though with an effect of déjà vu. Yes I confess that I immediately thought of The Hunger Games book. How not to? Teenagers of a certain age who are called to participate in a game, and they must kill each other until the end … A little slice? A lover left behind, another who appears and who could complicate matters. A duo appearing during the game, two lovers who know they can not win together. So yes big similarities and it’s true that it’s a bit confusing at first.

In fact, it took me a little time before really be able to separate the two stories, to stop comparing and to move forward by focusing on what’s really going on. So it is true that I put a little time to really immerse myself in the novel and be interested in everything that was happening. Yet, after a while, I ended up really interested in the events and the characters (even if it is true that some are much more interesting than others much more behind). In fact, we follow in an alternating way twelve players and their progress, even if it is true that some are recurring. Sarah and Jago are two characters that I liked to follow because of their humanity, even if they are as capable of anything when the situation demands it, they stay the persons they are. They do not think about the violence first, and that’s what makes it easier to understand them. The way they interact with each other is so touching and I’m curious to see how this relationship will evolve in such circumstances.

In the story, the characters must solve puzzles, all have a different shape and is presented in a different way: an image, a sentence, some numbers. And everyone has to understand what it is to find the keys scattered throughout the world and then save his/her lineage. But that does not mean that the world won’t collapse and the death of millions of people will occur so at the same time. A game that can only end with the death of all and let only live certain persons. But everything is a race against time and nothing will be easy for each character. All must face voluntarily or not this game. While some take pleasure in killing, it is more difficult to act for others who prefer to partner when they can.

We therefore follow the saga of these young people attending their choice, their desires and the things they have to do. Some will die very quickly, others during the story but I’m really curious to see where this will lead in the end. A step is engaged, one that will lead to many other problems.

In conclusion, despite a somewhat difficult start, I was really intrigued about this quest and its characters and I’m really curious to learn more and find out how it will end.

26 thoughts on “Endgame: The Calling by James Frey & Nils Johnson-Shelton”