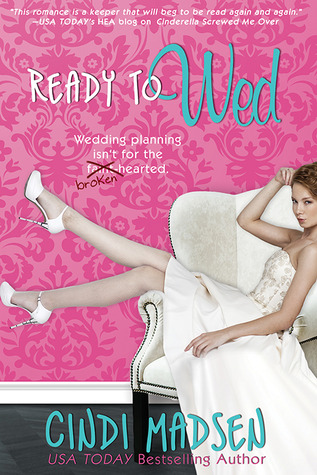 Synopsis: Ready to Wed by Cindi Madsen Dakota Halifax loves to be in love. In fact, as one of Las Vegas’s premier wedding planners, she’s built a whole career around romance. Which is why her own wedding has to be nothing short of perfect. And then her fiancé jilts her. While she’s waiting in her wedding dress. On a cruise ship already out at sea.Once back on dry land, Dakota tries to pour her heart into her business and weekly wedding advice column, Get Ready to Wed. But how can the heartbroken celebrate others’ true love? When she reconnects with her childhood best friend, surprisingly sexy and all-grown-up casino bouncer Brendan West, Dakota wonders if maybe she can fall back in love with being in love.

But then her ex reappears, begging for another chance, and suddenly Dakota questions if she’ll ever understand love. Can someone once-burned and twice-shy ever find her way down the aisle again?

Review: When I saw the book and the summary, I knew we were going to have a light and humorous story. Okay, just by looking at the cover we know that we will end up with a chick-lit book and as Cindi Madsen had already managed to make me have a good time with one of her other books, I was curious to discover this new one.

We discover Dakota, a wedding planner, who didn’t really have much luck for her own wedding. Indeed, going on a cruise in Jamaica on the wishes of her fiancé, she had prepared a lovely wedding on the beach … the only problem? Grant never got off the boat to reach the front of the wedding place, wounding and humiliating her at the same time. Just thinking back at the week, I doubt that sharing the cabin had to be pretty funny thereafter. But now, Grant also has an excuse, he learned that he was a father a few weeks before and panicked. Should she give him a second chance? And what to do with Brendan, her former childhood best friend back in town and who seems ready to help her and maybe more?

When the novel begins, we are ready to hate Grant, especially after what he made endure to the young woman but it is true that getting to know him, we understand that the author didn’t make him as a real bad guy. No, Grant is a very nice boy who has been overtaken by the situation and would love to make amends for his actions, he is perfectly aware of what he did and try to fix things. It was nice to have an ex that affects us and who is not necessarily evil and so that we do not hate. I was not expecting it, so much so that I was not even sure of the choice of the heroine for the end of the story. And then there’s Brendan, the man who says he does not believe in “forever” … it is very difficult to accept for a wedding planner who dreams of a beautiful marriage. But he is also a man who will be on Dakota’s side, someone who will try to protect her and allow her to be herself. We can only fall under his spell regarding his attentions and behavior. And then we have Dakota… Ah Dakota… This is a young woman who has a hard feeling regarding abandonment and who is now hurt irreparably. But it’s also why she can not live alone and falls in love very quickly. But it looks different with Brendan or at least that’s what she hopes for, even though she does not want to make him run away…

I had a good time with the whole story and I loved to follow his adventures and Dakota’s, as well as her articles full of ideas about weddings. The end of the story may have taken place a bit too quickly relative to their relationship which makes things a little less credible. But this is not really a problem and I had a great time with all.

25 thoughts on “Ready to Wed by Cindi Madsen”