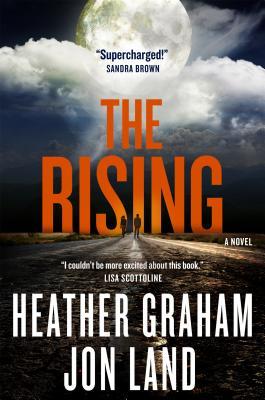 Synopsis: From acclaimed thriller-suspense novelists Heather Graham and Jon Land comes a story of action, mystery, and the endurance of young love.

Twenty-four hours. That’s all it takes for the lives of two young people to be changed forever.

Alex Chin has the world on a plate. A football hero and homecoming king with plenty of scholarship offers, his future looks bright. His tutor, Samantha Dixon, is preparing to graduate high school at the top of her class. She plans to turn her NASA internship into a career. When a football accident lands Alex in the hospital, his world is turned upside down. His doctor is murdered. Then, his parents. Death seems to follow him wherever he goes, and now it’s after him.

Alex flees. He tells Samantha not to follow, but she became involved the moment she walked through his door and found Mr. and Mrs. Chin as they lay dying in their home. She cannot abandon the young man she loves. The two race desperately to stay ahead of Alex’s attackers long enough to figure out why they are hunting him in the first place. The answer lies with a secret buried deep in his past, a secret his parents died to protect. Alex always knew he was adopted, but he never knew the real reason his birth parents abandoned him. He never knew where he truly came from. Until now.

“ALL RIGHT, VISITING CAPTAIN, the call is yours.”

Alex Chin watched the referee toss the ceremonial coin into the air, watched it spiral downward upon the St. Ignatius College Prep turf field set on a hill overlooking the Pacific Ocean in the Sunset section of San Francisco.

“Heads,” he heard the captain of the Granite Bay Grizzlies say.

“We want the ball,” Alex said, long hair matted down inside his helmet.

His gaze drifted again to the man in the wheelchair situated just off the sideline. He was clapping up a storm with the rest of the jam-packed crowd on the home side, gathered to watch the Central Coast sectional championship game between Alex’s St. Ignatius Wildcats and the Grizzlies of Granite Bay, a public high school near Sacramento.

Tom Banks was as close to a legend in these parts as there was, quarterback of the last Wildcats football team to make a run at the state title until a vicious hit out of bounds put him in a wheelchair for the rest of his life. His son Tommy played linebacker for the team now and had cracked the starting lineup earlier in the season. Alex had heard Tom Banks hadn’t been back to this field in all the years since his injury, tonight marking a quiet, unceremonious return just to watch his son play. The first time Alex had heard his name was when his own parents brought it up as a rationale to keep him from playing football.

As a result, Alex had joined the freshman team four years ago without saying a word to Li and An Chin, except to make up lies about where he was and what he was doing when he was really at practice. They didn’t find out until the local paper ran a story about the Wildcats promoting a freshman to start at quarterback for the first time in the school’s storied history. They’d been oh-and-four when Alex took over but then won five out of their last six games to finish at five hundred. The team upped that to seven wins Alex’s sophomore season, then eight his junior, before going undefeated this fall and earning a home play-off game.

Alex and the other two Wildcat captains switched positions with their Grizzly counterparts at the fifty-yard line to mimic the direction in which each would be going to start the game. The Cats were representing the Western Catholic Athletic League, and the Grizzlies, the Sierra Athletic Conference, with the winner advancing to the Division 3 state championship. St. Ignatius had taken the ball, instead of deferring possession until the second half, because they’d scored all eight times this year when they received the opening kickoff.

We want the ball.

Right now, though, Alex stooped and picked up the game ball the ref had laid down in the center of the Wildcat logo smack dab in the middle of the field.
“That’s not yours, son,” the referee scolded.

But as his fellow captains rushed into the pile of teammates cheering and jumping in a tight mass on the sideline, Alex tucked the football under his arm and jogged out toward the end zone near where Tom Banks sat alone in his wheelchair.

“That’s unsportsmanlike conduct!” he heard the ref call after him. “Fifteen-yard penalty, son!”

“This game’s for you, sir,” he said, handing Tom Banks the ball. “We’re gonna finish what you started.”

He watched Banks tuck the football under his arm the way he must have when he, like Alex, was an all-state quarterback. The man’s eyes teared up, the two of them looking at each other until Alex threaded a hand through his face mask to wipe his own. Then he ran off to a ripple of applause through the crowd, toward the sounds of Coach “Blu” Bluford yelling for him to get with it, the game was about to start, and what the hell was he thinking, anyway?

Alex knew his parents were up there somewhere, soon to be holding their breath as always in fear of his being injured. They may not have yelled at him the way Coach was yelling right now, once they found out he was playing football, but they’d been pissed too.

“You don’t understand,” his mother said.

“We are doing this for your own good,” his father added.

He remembered how his parents had looked at each other in that moment. Not angry, not disappointed, more like …

Alex threw himself into the lurching pile of teammates pounding each other, swarmed by them and he felt the energy radiating like the air on the hottest day summer had to offer. The referee blew his whistle to summon the teams out for the kickoff, the crowd rising to its collective feet, stomping on the bleachers.

“What are we?” Alex shouted from the center of the swarm.

“Then let’s stick together and play some football!”

And with that Alex led the kickoff team out onto the field where the referee was waiting for him, tucking his yellow flag back into his belt.

Alex turned toward Tom Banks, now cradling the game ball in his lap.

“Absolutely,” he said to the ref. “No question about it.”