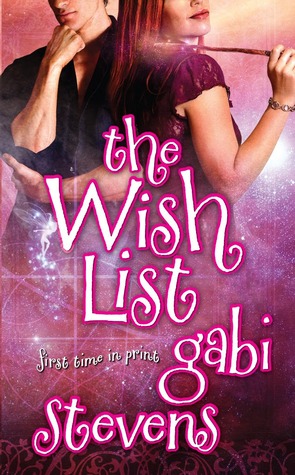 Synopsis: Kristin Montgomery is more than a little shocked when her aunts inform her they’re fairy godmothers. Worse, after dropping that bombshell they hand her a wand and head off on a world cruise. Now Kristin’s uncomplicated life as a CPA in San Diego has disappeared like magic and she not only has to deal with her burgeoning magical powers, but also a reluctant and distractingly sexy magical arbiter.

Tennyson Ritter is a historian. A scholar by choice, he is yanked from his studies to act as arbiter for the newly chosen fairy godmother. He doesn’t want to waste his time with a woman who doesn’t know anything about magic or the magical world, but soon the beguiling Kristin draws him away from his books and into her life.

But before Kristin can hone her skills and pass the tests necessary to fully claim her powers, she and Tennyson must work together to defend the world – both magical and human – against those that would claim her powers for their own.

Review: I had this novel for a long time, but it took me years to finally get into the story.

Kristin is a human who never really believed in magic. So when her aunts tell her that they are fairy godmothers, and that she is supposed to become one too, she doesn’t believe it! And yet, with her aunts away on a trip, our heroine will have to face not only her new powers, but also Tennyson Ritter, who has come to arbitrate her transformation. But our hero has no desire to teach her what magic is! Sexy, but also unbearable, Kristin will have to manage him without falling under his spell. If there was only that to manage, but it seems that magic attacks are taking place and that someone is taking advantage of the transition to take advantage of the lack of balance of magic.

It was a pretty cool paranormal romance novel. Our two heroes are a pleasure to discover, I was curious to see how things were going to turn out. I loved Callie, Zack, and Jake who bring a nice touch of freshness to the story. It was a light novel to have a good time with a heroine who discovers a world in which she is not at all comfortable. There are three volumes, one for each godmother, and I’ll be quite curious to see how it turns out, although I’ve seen that some readers say that each volume can be read separately.