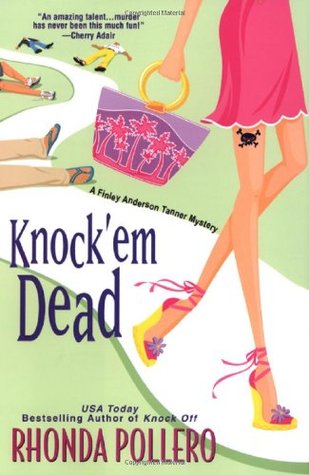 Synopsis: When her friend, Jane, shows up on her doorstep in nothing but a negligee, Finley knows it can’t be good news. Jane’s blind date with a hunk named Paolo was going great, until she woke up next to his corpse. Finley knows Jane wouldn’t hurt a fly, but the police don’t seem inclined to agree . . .

With most of her cash tied up in credit card debt, Finley must do the unthinkable in order to post bail and hire an attorney for Jane: hit her mother up for money. She’ll also need help if she wants to prove her theory that Jane and Paolo were drugged by the real killer. Luckily, sexy private investigator Liam McGarrity has offered his services—for a discounted rate, of course.

But this case is booby-trapped with pitfalls far more dangerous than mere temptation. And when someone tries to run Finley’s car off the road, she’s got to act quick to find a killer who wants to see her underground . . .

Review: After starting volume 2, going back to volume 1 and finishing this volume 2, I can finally tell you that it is important to read them in order! Yes, yes, yes!

Finley finds herself embroiled in a new case when her best friend Jane arrives home full of blood and tells her that she woke up after a romantic date next to a corpse. She doesn’t remember what happened, and of course, she’s soon accused of murder. Finley and her friends will do everything they can to find out the truth and try to get Jane out of jail (which won’t be easy at all). When danger is approaching and her job is on the line, Finley will have to choose what is most important to her. Luckily for her, she won’t be alone in her research because Liam has been hired to keep her out of trouble and not tarnish the image of the firm she works for.

That was a really nice novel again. We’re learning more about Jane and the past she’s hiding. There is also more Liam (how can we resist him?) and Finley will have to make decisions about Patrick. There are several things I didn’t see coming and it was a real pleasure to discover the author’s ideas. Yes it was a very nice cozy mystery novel and I can’t wait to read more and see what Finley will be getting into for the next volume.