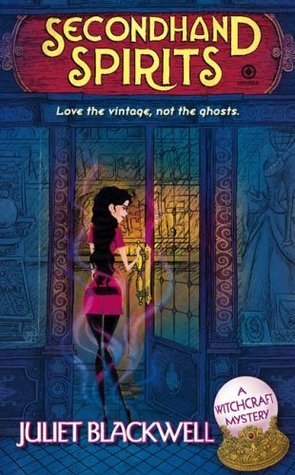 Synopsis: Lily Ivory is not your average witch. Her spell-casting powers tend to draw mischievous spirits while keeping normal humans at a distance. But now her vintage clothing store could give her a chance to make friends in San Francisco….

Lily hopes for a normal life when she opens Aunt Cora’s Closet. With her magical knack for vintage fashion -she can sense vibrations of the past from clothing and jewelry—her store becomes a big hit.

But when a client is murdered and children start disappearing from the Bay Area, Lily may be the only one who can unravel the crime. She tries to keep her identity a secret while investigating, but it’s not easy—especially under the spells of sexy “mythbuster” Max Carmichael and powerful witch Aidan Rhodes. Will Lily’s witchy ways be forced out of the closet?

Review: Here’s a novel I’ve had for years, possibly even since its release in 2012. If I left it in my huge TBR pile for that long, I was thrilled to get it out to discover its story. Keeping novels this long is nice, but when there are now a lot of volumes in the series, it means it’s going to hurt your wallet! Yes, because I’ve already ordered volume 2!

Lily is not a witch like the others, but she only wants to have a normal life and live without revealing what she is exactly. However, things don’t go as planned when one of her customers, from whom she wanted to buy vintage clothes for her shop, is found dead. Becoming suspicious, but above all blaming herself for not having been able to protect her and the little girl who disappeared the day before in the same building, Lily is about to embark on a much more dangerous story than she thought. But now she’s also getting the attention of several people including Max, a man as sexy as he is complicated who lives to destroy the myths on TV… So witches? Demons? Ghosts? There’s no such thing. But there’s also this cop who seems interested in our heroine’s past, which is still a bit of a blur to us too, although I can’t wait to find out more! And finally, there’s Aidan, this wizard who seems to have a purpose without us knowing exactly what it is.

Did I tell you about Oscar, the gargoyle in the form of a little pig? She may not have been wanted him at first, but I really loved him!

It was a very good first volume and a very nice surprise, I must say! A lot of bases are laid and I’m curious to learn more and to see Lily evolve in this new city! A novel very on the borderline between the UF and the paranormal cozy! I recommend it!