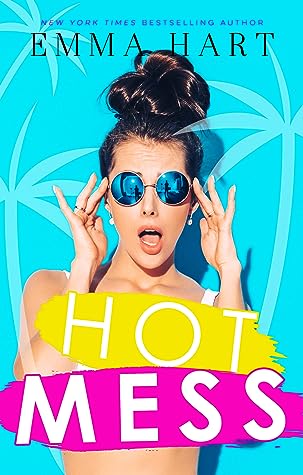 Synopsis: What do you do when the whole world has seen you getting down and dirty in a broom closet?

I, Elle Evans, am on the run.
Not from the fuzz—although that would be more exciting.
No, I’m on the run from the four-year-old private tape that, thanks to my vengeful ex, has probably already ruined my vlogging career.
There’s nothing like the entire world knowing what you look like mid-O.
Creek Keys, Florida, is a million miles away from NYC and the perfect place for me to hide for the rest of summer until I can figure out what I’m going to do.
Something that’s easier said than done since my new landlord’s daughter thinks you’re God’s greatest gift. Even better? Their beach house is right next to the one I’m renting, so there’s no getting away from her—or her hot, British dad.
Who most definitely does not think I’m role model material.
He might be right.
The problem is that neither of us can say no to her.
Or each other.

Review: With great pleasure, I embarked on this new Emma Hart story and I must say that once again I had a great time.

Elle Evans is a very well-known vlogger and her audience is quite young. But here it is, her ex-boyfriend shared a sex tape she didn’t even know he had. Becoming the new buzz in town, she decides to give it all up and move to a town far away to try to figure things out. But even there, people know who she is and judge her without knowing, starting with the sexy father of the nice Arielle, Theo, who finds himself renting his cottage to her. Yes, because he’s determined to keep his daughter as far away from her as possible.

It was a very nice novel to read and I loved discovering Theo’s aunt who has only one passion, dancing naked on the beach to attract aliens. But of course, I also really liked Elle, Theo and Arielle, but also all the secondary characters that we are lucky enough to discover.

This story was again light and full of humour as we like them with Emma Hart!