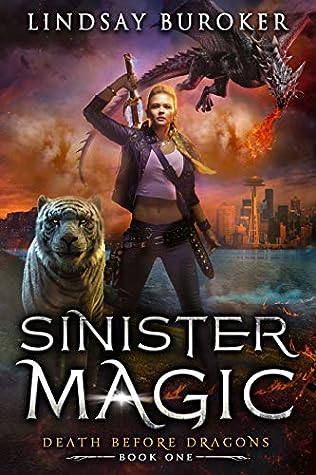 When magical bad guys hurt people, I take care of them. Permanently.

This doesn’t make me popular with the rest of the magical community—as you can tell from the numerous break-ins and assassination attempts I’ve endured over the years. But thanks to my half-elven blood, a powerful sword named Chopper, and a telepathic tiger with an attitude, I’ve always been able to handle my problems with aplomb. Maybe some cursing and swearing, too, but definitely aplomb.

That changes when my boss is afflicted with a mysterious disease, a government agent starts investigating me, and a godforsaken dragon shows up in the middle of my latest job.

I’ve taken down vampires, zombies, and ogres, but dragons are way, way more powerful. And it doesn’t look like this one is going to like me.

Worse than that, he wants to use his magic to compel me to do his bidding, as if I’m some weak-minded minion.

That’s not going to happen. I’d die before being some dragon’s slave.

But if I can’t figure out a way to avoid him, save my boss, and get rid of the government spook, I’m screwed. Or dead. Or screwed and dead. And that’s never comfortable.

Review: I bought the novel when I saw it for 0.99 and as it is an urban fantasy, I couldn’t resist. I was also curious to discover this author I didn’t know yet. I must say I was pleasantly surprised.

Val is an assassin for the government, but not just any assassin, because she kills magical creatures who have perpetrated horrible crimes. But now her latest case is going to turn her whole life upside down! Indeed, while she is hunting a wyvern, she finds herself in front of a real dragon, an entity that is not usually on Earth, and he is as beautiful as he is unbearable. Oh yes, because he is determined to keep her out of his way or use her as a bait to stop the people he has been sent to. On top of that, our heroine is going to have to do everything she can to save the life of her boss who is in hospital, as well as trying to clear her name and his since an investigation has been opened against them.

It was a really nice first volume to read and I really liked the author’s ideas. Zav is a really unbearable dragon and at the same time you can’t help but like him too. Val, on the other hand, is a very strong, outspoken woman who doesn’t hesitate to put herself in danger. And what about her tiger? I really loved her companion who is far from ordinary!

Yes, it was a good discovery and I can’t wait to dive into volume 2!