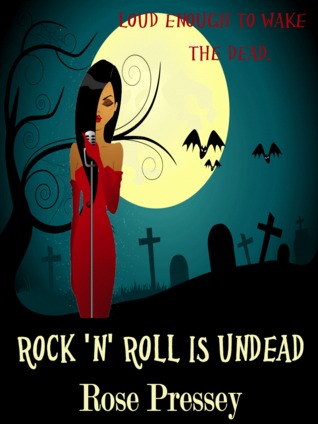 Synopsis: Veronica Mason, lead singer of the rockabilly band The Voodoo Zombies, discovers her vampire bass player staked through the heart. A vision of the murder flashes in Veronica’s mind and she wonders if she’s going bonkers. Up until now her supernatural skills consisted of a few botched love spells.

Using her sexy voice and pin-up style has paid off, she’s about to land a record deal. But suspicion soon turns to her when another vampire turns up as nothing more than a pile of ashes a vacuum would have a hard time sucking up. Veronica has to hone her paranormal powers or lose her dealand possibly her life.

When an utterly delicious mystery man steps in as the new bass player, Veronica can’t figure out if he’s there to help or cause more problems. What she does know is she can’t resist his good looks and sex appeal. She wonders if they’d make rockin’ music together. But helping the undead could stop her from finding out and leave Veronica dead permanently

Review: I’ve had this novel for a very long time, and if I didn’t really know what to expect when I started it, I must say that I had a really good time.

Veronica is a singer and if she is not really known, she hopes that things will change soon. However, if her name is on everyone’s lips, it is not because of her talents, but because she found the body, or rather the ashes, of two vampires. But here she goes from anonymous to suspicious singer and everyone watches her actions. Moreover, she feels like she is being followed without understanding what is going on. And what about Buzz, this new bass player, more than sexy who seems to hide something? Is he really a friend or is he after Veronica?

This is a novel that made me have a good time and I must admit that I was curious to find out the truth about Buzz and the murders. It was an entertaining novel and it’s a shame there’s not sequel because I would have read it with pleasure.

8 thoughts on “Rock ‘n’ Roll is Undead by Rose Pressey”