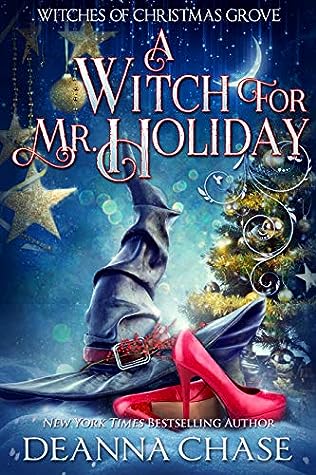 Synopsis: Welcome to Christmas Grove, where holiday magic and matchmaking is in the air.

When Rex Holiday walks into the charming town of Christmas Grove, all he plans to do is to spend the season helping out at his buddy’s Christmas tree farm. What he doesn’t expect is for an overzealous matchmaker to slip a love potion into his cider. But the joke’s on the resident matchmaker, because not even a potent love spell can break through the walls he’s built around his heart. But when the girl next door catches his eye, some of his barriers start to crumble. Still, Rex Holiday’s time in Christmas Grove is only temporary. He can’t afford to fall in love. Or can he?

Holly Reineer is a powerful spirit witch who can see the future for everyone. Everyone but herself that is. And when Rex Holiday walks into her life, she sees his, too. He’s destined for a big corporate job all the way across the country. So when he starts to show interest in her, she knows it’s only temporary, and Holly’s not interested in a fling. She wants her happily-ever-after. But he’s very hard to resist… Can a love spell rewrite the future? If so, Holly will need to learn to follow her heart and, for once, trust what she can’t see.

Review: I was very curious to find out to discover a book by Deanna Chase and I was delighted to find this volume for free on Amazon because it gave me the opportunity to dive into one of her novels. By the cover I thought it was a cozy mystery, but it’s not the case at all! It’s a romance with a touch of paranormal. But when I say “a touch”, it is really “a touch”, that is to say it is very light. But it was nice.

Holly lives in Christmas Grove, she’s struggling to recover from a difficult break-up which hanpenned two years ago. It’s also the case for Rex who is only in town for a month. When someone pours a love potion into their drinks, they will have to decide if they are willing to put aside all their wounds to move on. But they also know that whatever happens between them, Rex is destined to leave and their story has an end date before it even begins.

I had a little trouble getting into the story, but once I did, I had a great time with the characters! Of course, the story is not very surprising and it follows a fairly classic line, but it allows you to read something light with a touch of Christmas, which is always nice.

It was a good first tome and I’m quite curious to try another one of the author’s series!

14 thoughts on “A Witch For Mr. Holiday by Deanna Chase”