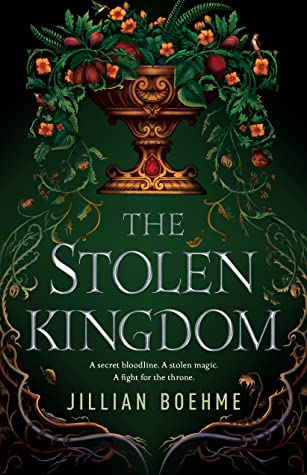 Synopsis: For a hundred years, the once-prosperous kingdom of Perin Faye has suffered under the rule of the greedy and power-hungry Thungrave kings. Maralyth Graylaern, a vintner’s daughter, has no idea her hidden magical power is proof of a secret bloodline and claim to the throne. Alac Thungrave, the king’s second son, has always been uncomfortable with his position as the spare heir—and the dark, stolen magic that comes with ruling.

When Maralyth becomes embroiled in a plot to murder the royal family and seize the throne, a cat-and-mouse chase ensues in an adventure of dark magic, court intrigue, and forbidden love.

Review: I loved the cover of the novel when I saw it and the synopsis also appealed to me right away! So I gladly jumped into this novel.

Maralyth has always wanted to take over her father’s winery. But as a girl, she knows that apart from staying in the kitchen, she has no future. Yet she loves it! However, her life will change overnight when she finds herself kidnapped by one of her father’s employees. Indeed, it seems that she comes from an important family and that she can claim the throne.

In parallel, we also follow Alac, the second son of the king, who has trouble with his position. He dreams of getting away from it all, away from his father and his brother who are unbearable with him. But when he meets Maralyth, his outlook changes.

This was a fun novel and I enjoyed following our two heroes. It was a fairly classic YA fantasy but it was also a really nice one.

7 thoughts on “The Stolen Kingdom by Jillian Boehme”