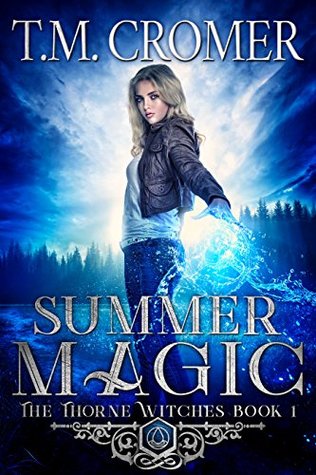 Synopsis: Life in a small town can be tough. It can be even tougher when you’re a witch whose magic regularly backfires. But Summer Thorne only wants one thing: to create the perfect sanctuary for unwanted animals. Nothing and no one is going to stop her. Not even the sexy sheriff who is determined to shut down her rescue center. And certainly not the laboratory where she illegally obtained her mischievous chimpanzee, Morty.

Sheriff Cooper Carlyle has one goal: to keep his town safe. That includes his stubborn neighbor, Summer, whether she wants him to or not. When the animals of Summer’s menagerie get loose and create havoc, he decides enough is enough. But things aren’t always as they appear, and Coop stumbles upon the secret the Thorne sisters have been hiding.

Coop and Summer discover Morty holds the key to unlock a twenty-year-old mystery surrounding the death of Summer’s mother. Now Coop is faced with breaking the law he is sworn to uphold in order to protect Summer and her beloved pet from a threat more dangerous than any of them imagined.

Review: This is a novel that I didn’t know about, just like its author. But I was curious to find out what it was all about.

Summer Throena is dedicated to animals and has created a sanctuary for them, even if they sometimes escape to cause trouble in town. But the sheriff had enough. The same sheriff who, when she was younger, humiliated her so she would stop hanging around him. And he’s determined to force her to close the center, or at least make her elephant and chimpanzee disappear. But Summer is determined not to let him.

The author’s writing is very nice and enjoyable to read with scenes that I enjoyed discovering, but I have to say I had a little trouble getting hooked on the characters. The sheriff is a bit annoying with his “I like you, but I hate you” attitude to keep Summer going. There were several times when I felt like the story was over but something was always added to keep it going.

Maybe it wasn’t the right time to read this story, but unfortunately I think I’ll stop here.