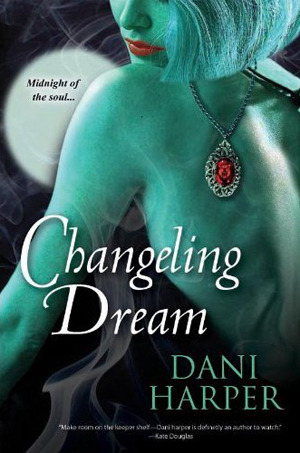 Synopsis: In times of stress Jillian Descharme has always found calm in her dream of a great white wolf with haunting blue eyes. But she is startled when the visions return and this time seem so real. Late at night he comes to her, speaks to her, touches her. It’s almost as if he’s alive…

Thirty years ago James Macleod lost his wife and unborn child to a killer bent on destroying the Changelings. Though he longed for death, his animal instinct fought for survival and James has been a wolf ever since. Yet now a woman has reawakened the man in him, taming wild instincts but arousing still wilder needs. With his ancient enemy hunting the legendary white wolf, James must fight for new life, new hope, new love.

Review: I’ve had a signed copy of this novel in my TBR pile for a very long time and even though I haven’t read the first volume, I thought it was time to dive into the story. Since it’s a paranormal romance novel, I knew it wouldn’t be too important, and I was right.

James Macleod’s life took a terrible turn the day his wife, pregnant with his baby, was murdered. Since then, he has decided to stay in wolf form to avoid facing life. It’s been thirty years now, and it’s been easier. He doesn’t want to have to face his feelings. But when Jillian comes to town, his perception changes. He doesn’t know where he knows her from, but she looks familiar and his wolf is irresistibly attracted to her.

Jillian is also broken by her past. A wolf saved her when she was younger, but no one believed her. Now she sees the wolf she thought was a dream again. Maybe James and Jillian can save each other?

It was a very nice book and I’m quite curious to discover the first one about Connor and Zoey, as well as the third one about their sister.