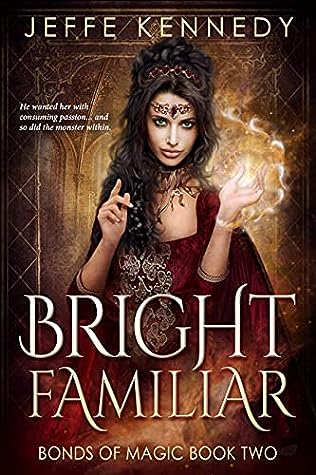 Synopsis: He wanted her with consuming passion… and so did the monster within.

Lady Veronica Elal has been freed from her tower—and entered a life of servitude. It doesn’t matter that her wizard master has odd ideas about circumventing Convocation tradition and making their relationship equal. Nic prides herself on her practicality and that means not pretending her marriage is full of hearts and flowers. Besides she understands that, despite her new husband’s idealism, they face obstacles so great the pair of them could be crushed to nothing, even without dashing themselves brainless trying to fight the Convocation.

Lord Gabriel Phel has come this far against impossible odds. He was born with powerful wizard magic, the first in his family in generations. He’s managed to begin the process of reinstating his fallen house. And—having staked his family’s meager fortune to win a familiar to amplify his magic, a highborn daughter to be mother to his children, his lady, and lover—he rescued Nic in a distant land, successfully bringing her home to House Phel. Though she’s cynical about their chances of success, he’s certain they can defy their enemies and flourish. Together.

But, the more Gabriel discovers about working with the fiery Nic, attempting to learn the finer points of wizardry and marriage, the more illicit fantasies plague him. His need for Nic—and the dark cravings she stirs in his black wizard’s heart—grow daily. Though Nic has reconciled herself to being possessed by Gabriel—and indeed yearns for even more from her brooding and reluctant master—creating a new life for herself isn’t easy. Especially when Gabriel seems determined to subvert the foundation of her world. Starting with her father.

Review: I really liked the first volume of the series and I was eager to find our two heroes in this second volume. I must say that I had as good a time as with the previous one.

Gabriel and Veronica now find themselves having to cohabitate. Gabriel has dreams of grandeur and it’s quite difficult for Veronica who tries to bring him down to earth. She knows the consequences that could happen, but she’s also determined to raise House Phel from the ashes. Together, they will combine their powers to become greater and try to outdo the other Houses. Of course, it won’t be easy. Their path is fraught with obstacles and no one knows if they’ll be able to get up every time, but they’re sure to try!

The novel is well paced and again, I am looking forward to finding out what happens next!