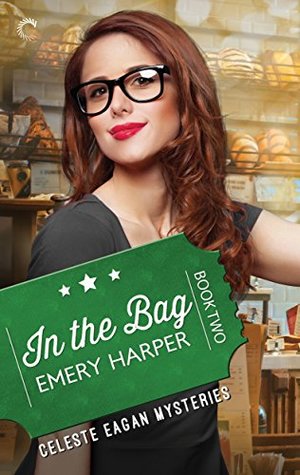 Synopsis: Life as the principal actress at the Peytonville Playhouse is all I ever thought it’d be—and more. I’m practically living the bohemian dream, until my BFF Levi finds a dead body on his property. And is swiftly arrested for murder.

Detective Shaw Muldoon is my almost-but-not-quite-there-yet beau. He knows me. He knows Levi. He knows neither of us is capable of something so heinous. And he knows that despite his strict orders to leave the case with the professionals, I’ll launch my own investigation to clear Levi’s name.

A dubious bakery owner who’s taken a fancy to me: check.

This season’s “it” handbag practically falling into my lap: check.

Levi’s up the creek if I don’t uncover the truth…but my investigation has put me firmly in the murderer’s sights.

Review: The first volume of the series was very nice and I was curious to discover this one. Plus I love cozy mysteries, so how could I resist it?

Celeste dives head first into a brand new investigation. Levi, her best friend is accused of murder. She knows he can’t kill a fly, so another person? Never! But the police don’t agree. How can Muldoon believe that Levi is guilty? Determined to prove that her friend is guilty, Celeste will do everything she can to expose the truth and bring the culprit to justice. The problem? Everything doesn’t go according to plan.

This was a fun novel to read and while I suspected the identity of the culprit pretty quickly, I enjoyed finding out everything. What’s a shame, though, is that the series seems to have been dropped after two volumes, since this volume was released in 2017. So I think we may never get the sequel.

6 thoughts on “In the Bag by Emery Harper”