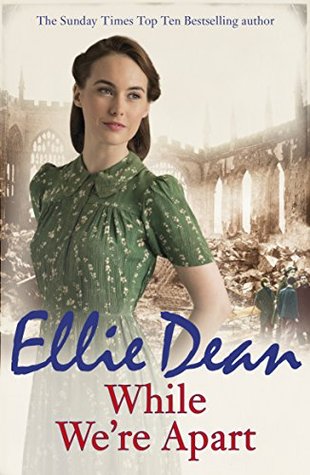 Synospsis:  It is 1942 and England is at war. Mary Jones has just celebrated her eighteenth birthday and said goodbye to her childhood sweetheart Jack, when she learns that her house has taken a direct hit during a tip and run raid.

With both her parents dead and her home destroyed, a distraught Mary moves in with Jack’s parents. But her father’s trunk is still intact amid the ruins, and Mary discovers a shocking secret amongst his diaries.

Mary travels to Cliffehaven on the south coast in search of answers. Here she is billeted with

But she begins to regret getting involved, for there can only be trouble ahead…

Avis : When I saw this novel, I wasn’t aware that it was a volume 8 and even though I think it’s important to read the previous volumes, I didn’t have much trouble getting into the story.

Mary Jones is in love with Jack, but her life falls apart when she learns he has enlisted to go into battle. Nothing goes as planned, after going to the train station for Jack’s departure, she discovers on her return that the rectory where her father and mother lived was destroyed, and that they were killed instantly. In the rubble, she discovers her father’s journals, which tell her why her mother has always hated her. A revelation that will change everything and force her to understand who she really is.

I had a good time with this novel, although I must say that the ending is a bit abrupt. It is understandable because, as with any saga, the following story will surely be in volume 9.

I am quite curious to go back and discover the first volumes to see the previous stories.

10 thoughts on “While We’re Apart by Ellie Dean”