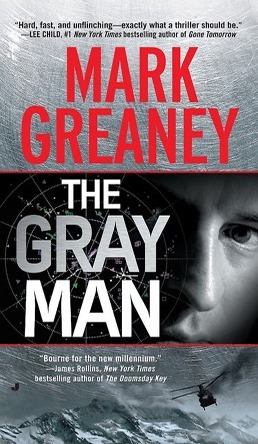 Synopsis: Courtland Gentry is a good man. But he’s a great assassin.

To those who lurk in the shadows, he’s known as the Gray Man. He is a legend in the covert realm, moving silently from job to job, accomplishing the impossible and then fading away. And he always hits his target. Always.

But there are forces more lethal than Gentry in the world. Forces like money. And power. And there are men who hold these as the only currency worth fighting for. And in their eyes, Gentry has just outlived his usefulness.

But Court Gentry is going to prove that, for him, there’s no gray area between killing for a living and killing to stay alive…

Review: After learning that this novel was going to be adapted by Netflix, I was curious to find out how it was and I must say that I was pleasantly surprised. It’s an action-packed story that keeps us on the edge of our seats from beginning to end.

The Gray Man is an incredible hitman who always gets the job done. But he doesn’t go after the bad guys, no, no, he’s a former CIA agent and would never put his convictions aside for money. Yet his latest case could change everything: someone didn’t appreciate him killing the man he was sent for. He then finds himself hunted by the best commandos in the world across the planet as he must decide whether to go save the family of his employer who betrayed him.

9 thoughts on “The Gray Man by Mark Greaney”