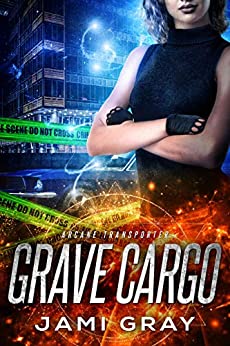 Synopsis: A dead mage, a missing friend, and an unpredictable alliance merge into a volatile package sending Rory careening through the Arcane elite’s deadly secrets.

Rory Costas, Arcane Transporter, is finally out from under the Guild’s thumb and ready to jumpstart her career as an independent contractor. Even better than the potential income, her promising future offers the additional perk of keeping her coveted magic out of the hands of the all-powerful Arcane Families. But when a dead mage drops at her doorstep on the same morning her best friend and roommate, Lena, goes missing, Rory is drawn out of her comfort zone and into an ominous race against time.

Retracing Lena’s convoluted path through the Arcane elite’s moneyed secrets, bitter vendettas, and lethal curses, Rory crashes into Zev Aslanov’s investigation of the murdered mage. When the Cordova Family’s enigmatic hunter reveals the dead man was Lena’s last client, Rory must convince Zev her missing friend is a victim, not a suspect. To uncover the truth and save her friend, Rory agrees to work with Zev, even though their uneasy partnership may mean revealing her hidden magic.

As the clock ticks down, can they dodge Zev’s suspicions and Rory’s secrets to expose the real evil mastermind or will they crash and burn?

Review: I didn’t know this series, but after seeing that Sandy Williams recommended it, I was immediately intrigued. Plus I love urban fantasy, so how could I resist?

Rorry hasn’t had an easy life so far. She hides her powers and tries to keep a low profile, but her new job will change everything. The matriarch of one of the families offers her a job as a driver, which will put her in the spotlight but will also allow her to earn a lot of money. But on top of that, her best friend has disappeared, the same day that the corpse of a mage is discovered in the hall of their building. Rorry is determined to find out what happened and to rescue her friend. Her path will cross that of the sexy Zev who, as a member of a family, is also investigating the death of the mage. They join forces to uncover the truth, but Zev may discover his secret and Rorry may fall under his spell again. And as the families begin to discover her power, our heroine doesn’t know what’s in store for her.

I had a great time with this novel, even if the beginning is a bit dense. The Rorry/Zev dynamic is very cool and I’m curious to see what happens next. I’m also curious to see what will happen with Rorry’s power and can’t wait to learn more about her. On the other hand, I felt like I was missing some things and I think it’s important to read the novella before the novel because there is a lot of reference to it.