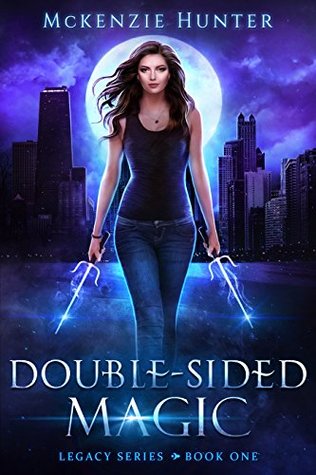 Synopsis: I am Levy Michaels. Once my kind were the hunters—now we are the hunted

Supernaturals are out of the closet but I have to stay hidden because of the type of magic I possess. I’m a Legacy. It sounds like the title should come with reverence, a trust fund, or at the very least a cool backstory—instead it comes with a death sentence.

I have to hide in plain sight and pretend to be just human. I’m pretty good at it. I live a simple and somewhat normal life, and I work in antique acquisitions. Everything’s going fine until a dangerous and enchanted dagger that was once in my possession is stolen. I didn’t think things could get any worse until I woke up next to a dead shifter, fae, and mage, without any memory of the past twenty-four hours.

Considered guilty of murder by most of the magical community and humans, I must work with Gareth, the sexy and dangerous leader of the Supernatural Guild. If he’s as good as rumored, it’s only a matter of time until he discovers the truth about me—then being found guilty of murder is the least of my worries.

Review: This is a novel I had heard a lot of good things about and so I bought it. It took me a while to get into it, but I must say that I had a great time.

Levy is a Legacy, a creature that is not supposed to exist anymore. Those like Levy are hunted and exterminated; she hides and lives as a simple human. A few hunters occasionally come after her, but she always manages to get away… until now. Her latest job, a magic dagger, puts her in the spotlight. She was trying to stay out of the way, but finds herself rubbing shoulders with the leader of the Supernatural Guild who would kill her if he knew who she was. Yes, because she is part of a race that has many powers and has killed millions to amass even more. But Levy is not like that, she doesn’t seek power, she just wants to live a normal life. Unfortunately, suspected of murder, she will have to find out who is trying to trap her and will also understand very quickly that what we think is gone, is never really.

This novel is a rather classic UF and I can say that I had a good time with the characters. There are only four volumes in the series, which is reasonable and I can’t wait to discover the sequel. Because that ending? Arghh I can’t wait to see what Levy will do!