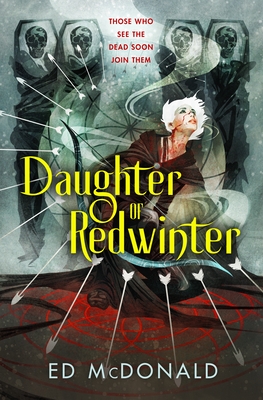 Synopsis: Those who see the dead soon join them.

From the author of the critically-acclaimed Blackwing trilogy comes Ed McDonald’s Daughter of Redwinter, the first of a brilliant fantasy series about how one choice can change a universe.

Raine can see–and more importantly, speak–to the dead. It’s a wretched gift with a death sentence that has her doing many dubious things to save her skin. Seeking refuge with a deluded cult is her latest bad, survival-related decision. But her rare act of kindness–rescuing an injured woman in the snow–is even worse.

Because the woman has escaped from Redwinter, the fortress-monastery of the Draoihn, warrior magicians who answer to no king and who will stop at nothing to retrieve what she’s stolen. A battle, a betrayal, and a horrific revelation forces Raine to enter Redwinter. It becomes clear that her ability might save an entire nation.

Pity she might have to die for that to happen…

Review: When I discovered the synopsis and saw the reference to ghosts, I was eager to discover the story. It had been a while since I had read a fantasy novel and I gladly jumped in.

Raine knows she shouldn’t get involved in other people’s problems, but when she meets a woman who is hurt, she can’t give up on her, even though she learns that the woman is being pursued by men who want her back at any cost. A big mistake. Because of course, these men manage to find them.

When she is offered a new life, Raine embarks on this adventure to save her skin, but the situation will be far from restful and she will have to face a world she does not know.

I had a good time with this novel, Raine was a very intriguing and complex character. Her life hasn’t been easy so far and it’s not going to get any easier. I really liked the characters and was curious to find out what would happen.