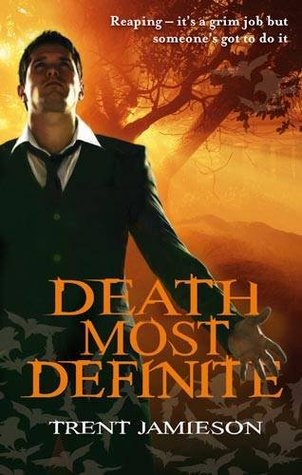 Synopsis: Steven de Selby has a hangover. Bright lights, loud noise, and lots of exercise are the last thing he wants. But that’s exactly what he gets when someone starts shooting at him.

Steven is no stranger to death-Mr. D’s his boss after all-but when a dead girl saves him from sharing her fate, he finds himself on the wrong end of the barrel. His job is to guide the restless dead to the underworld but now his clients are his own colleagues, friends, and family.

Mr. D’s gone missing and with no one in charge, the dead start to rise, the living are hunted, and the whole city teeters on the brink of a regional apocalypse-unless Steven can shake his hangover, not fall for the dead girl, and find out what happened to his boss- that is, Death himself.

Review: I’m always on the lookout for UF and even more so when the main character is male. I had seen this novel pass by a long time ago and bought it without diving into it. But now I have!

Steven doesn’t have an easy life, he’s a soul-crosser. But his life is turned upside down when someone starts killing people like him. He finds himself one of the last of his kind alive. Everyone around him dies and he is only saved by a ghost who helps him in any way he can. This woman is as charming as she is annoying, but she will be of immeasurable help to him. Yes, because Steven has to find out what’s going on and stop it all before it turns into an even bigger nightmare.

I was a little disappointed with this novel because I expected more. It was a decent story, but it didn’t captivate me. Besides, I don’t think I will read the sequel. But it was still interesting to discover this world as well as Steven’s work or his link with the ghosts.

Nice, but nothing more.