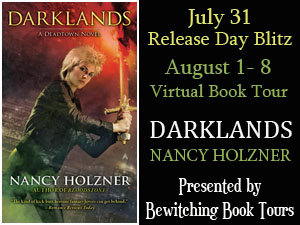 They call it Deadtown: the city’s quarantined section for its inhuman and undead residents. Most humans stay far from its border—but Victory Vaughn, Boston’s only professional demon slayer, isn’t exactly human…


Boston’s demons have been disappearing, and Vicky’s clients are canceling left and right. While fewer demons might seem like a good thing, Vicky suspects foul play. A missing Celtic cauldron from Harvard’s Peabody museum leads her to an unwelcome conclusion: Pryce, her demi-demon cousin and bitter enemy, is trying to regain his full powers.


But Pryce isn’t alone. He’s conjured another, darker villain from Vicky’s past. To stop them from destroying everything she loves, she’ll have to face her own worst fear—in the realm of the dead itself.