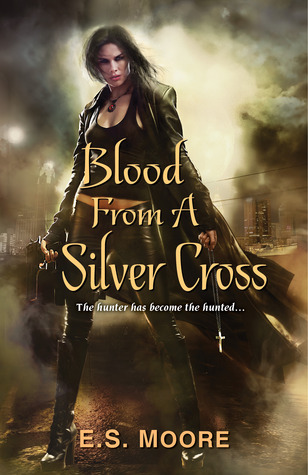 Synopsis: Trust is a dangerous business.

Review: I was so impatient to finally read this new book in the E.S. Moore series! I love Kat Redding and each volume is better than the last, so I was curious to see what the author was going to present us this time. And I must say that I took a great pleasure in reading it!

Kat would have liked to return to a quieter life, but it seems that this is impossible. And now some mutilated and crucified werewolves bodies appear in the city, abandoned by the Left Hand, and our heroine must find those responsible before everything degenerates. More than that, everyone seems to want something from her, whether the Ethan’s demon, Adrian, or other characters that I’ll let you discover. They’re all interested in her and it was sometimes difficult to understand their enthusiasm, but I’m eager to learn more. And while she still does not know how to deal with her feelings for Jonathan, now the Denmaster has found a new girlfriend, a newcomer who seems too nice to be true: Kiera. But Kat is convinced that there is something behind all this, and the fact that she is jealous is certainly not reason, is not it?

I really enjoyed this novel, Kat always evolves through the stories and it is interesting to see the woman she is becoming. She tries to be the cold heart person she has always been, but now that there are plenty of people who depend on her, this is no longer possible. And then even if she does not want to deal with her ​​feelings, she realizes that some persons won’t wait for her to realize what is happening. This novel also allows us to learn more about Nathan, and although I had doubts on her assumptions, but I did not expect at all the truth that we learn at the end of the book. I also had trouble deciding on Kiera, because although I can understand Kat, I was not so categorical and I was really curious to find out what she really wanted and I was quite surprised there too. But there is more and I was also touched by Jeremy and about the revelations of his history.

You will therefore understand, it was again a very good novel, and I am as always very eager to read more. In addition, some new leads are opened for the rest of the story and I look forward to see how it will be resolved, as it must be said that I did not expect at all for such a conclusion which broke my heart. A new great book.

8 thoughts on “Blood from a Silver Cross by E.S. Moore”