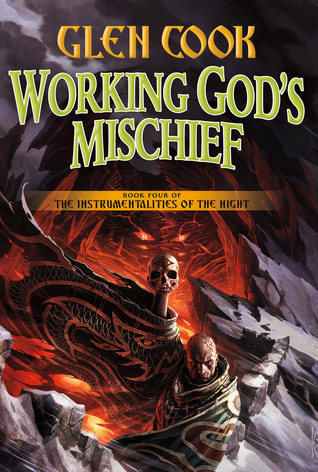 Instrumentalities of the Night, Book 4

Synopsis: Arnhand, Castauriga, and Navaya lost their kings. The Grail Empire lost its empress. The Church lost its Patriarch, though he lives on as a fugitive. The Night lost Kharoulke the Windwalker, an emperor amongst the most primal and terrible gods. The Night goes on, in dread.  The world goes on, in dread.  The ice builds and slides southward.

But there is something new under the sun. The oldest and fiercest of the Instrumentalities has been destroyed–by a mortal. There is no new Windwalker, nor will there ever be.

The world, battered by savage change, limps toward its destiny. And the ice is coming.

Working God’s Mischief is the savage, astounding new novel of The Instrumentalities of Night, by Glen Cook, a modern master of military fantasy.

Review:
This is book 4 in a series, and I haven’t read any of the previous books.

And boy, was I lost.

There’s a lot going on, and with no knowledge of what happened before, I was confused a lot. Only slowly did I get a grip on what was going on and still I didn’t get the whole picture. I can tell one thing: Don’t do what I did. If you think this sounds like an interesting book, go pick up the previous books first.

And then there was the writing. It’s dense and jarring at times. It kept dragging me out of the story, making this a slow read. I will confess this may just be me: I’ve gotten used to the fast paced and flowing writing in Urban Fantasy. The writing style that’s often used in (High) Fantasy just isn’t my cup of tea anymore.

So both the writing and plunging right into the middle of a story made this a difficult read for me. This story sure does have it’s merits though. There’s lots going on, and there are many intriguing characters. The world feels lifelike and complex. I can’t help but wonder if I would have enjoyed this book more if I had started from book one, and had been eased into Cook’s world and writing.

All in all this is a nice read, but it didn’t sell me on this series. I don’t think I will go back to read the first three books. I might try something else by Cook if I run into it, and it turns out to be the first book in a series.