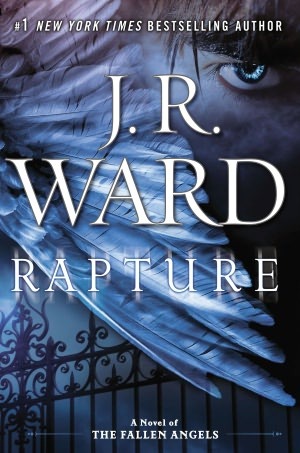 Synopsis: Out of the wickedly inventive imagination of #1 New York Times bestselling author J.R. Ward comes a world where sin and salvation collide in a battle for the future of mankind—where a cynical fallen angel struggles against the seven deadly sins and a demon’s lure over seven chosen souls…

Mels Carmichael, reporter for the Caldwell Courier Journal, gets the shock of her life when a man stumbles in front of her car outside the local cemetery. After the accident, his amnesia is just the kind of mystery she likes to solve, but she soon discovers they’re in over their heads with his past. Over their heads with passion, too…

As shadows walk the line between reality and another realm, and her lover’s memory begins to come back, the two of them learn that nothing is truly dead and buried. Especially when you’re trapped in a no holds barred war between angels and demons. With a soul on the line, and Mels’s heart at risk, what in Heaven—or in Hell—will it take to save them both?

Review: It is always a pleasure to read a novel by J.R. Ward. Moreover, I’m becoming more and more addicted to this series that improves over the books. So we still follow our savior, Jim Heron in his fight against evil. Matthias is the former leader of the XOps (and Jim’s ex-boss). He was in Hell after Jim’s defeat we saw in Book 2 but he returned to Earth. Now he has a new chance of redemption. Why this second chance? Does he deserve it? It’s actually a punishment against Jim’s enemy. Indeed, the opposing camp didn’t comply with the rules in the last round so the Creator decided to punish Jim’s opponent by putting Matthias’s soul into play again. So the battle starts all over again but it’s also a new opportunity for Jim to try to save his former boss as he failed the first time.

Thus we find Matthias back on Earth. He wakes up naked and wounded at the Caldwell Cemetery, on Jim’s grave. While he was trying to leave this place, he was hit by the car of a young journalist at the Caldwell Courier Journal, Mels Carmichael. Now he is suffering from amnesia. Immediately there is alchemy between these two characters but of course there are many obstacles between them, especially Matthias’s heavy past. Then there is the threat hanging over his head and Matthias, though, is well aware he is running out of time.

The Good team -Jim’s team- has taken a serious beating despite their last victory against evil. Indeed, after the loss of one of their own, the team tries to recover. But it’s really hard for Adrian to accept this loss and Jim spends a lot of time thinking about Sissy. He wants to deliver her from Hell at all costs, to the point of forgetting his true mission.

Matthias until this book 4 was the perfect villain. A nasty character, a true sadist, a cold-blooded murderer… in short, a character that we used to hate in the previous books and yet here he will show another side of himself. Does such a character deserve to be saved? Amnesia must surely have something to do with that but I must say that it was a pleasure to follow Matthias as the hero of this book while at first I didn’t like him at all. I was even scared at the idea of starting reading this book. But I was wrong because Rapture is probably the best book in the series so far. Matthias is such a proud man… who can’t stand being dependent on others despite his vulnerability. He is a wounded man, one-eyed and covered of scars, obvious stigmas of his heavy criminal past. He is also a determined man who seeks to redeem himself and throughout this volume, J.R. Ward manages to make him more likeable to the reader. Of course we also discover Matthias’s past when he was a teenager and the trigger that turned him in this man feared by all. It was quite interesting to see how he got there.

I liked Mels also. The young woman lives with her mother and is looking for the big scoop that could boost her career as a journalist and thus change her life. She is an endearing young woman who cares for others. She is intelligent, very effective in her work and always willing to help others. Her relationship with her mother is very touching and I enjoyed finding out a bit of her past too, including her memories about her father who she has always admired.

This book 4 marks a turning point for Jim and his evolution, especially after what he did in the last pages… I was also very surprised by Adrian’s action and concerning the Creator, I confess I didn’t expect this kind of revelation. Of course I suspected there was something strange behind this but I had no idea of such a big revelation!

To conclude, this book is full of surprises and I am now very curious to read the sequel!