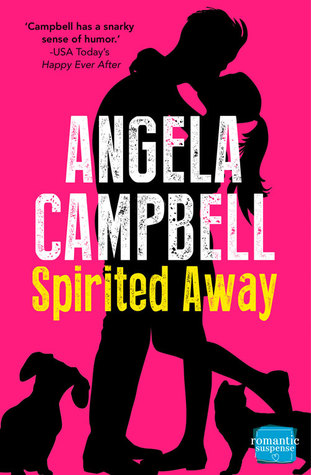 Synopsis: Who knew pet-sitting could be so dangerous…or so sexy?!

Socially awkward Emma “Spider” Fisher prefers her laptop to people, so she’s more than happy to oblige her boss when he asks her to pet- and housesit while he honeymoons in London.

But it doesn’t take long for accident-prone Spider to lose a dog, get locked out of the house, and set off the house alarm!

Thankfully, her hot new neighbor is more than happy to come to her rescue. But Noah West is a mystery to Spider—and one she intends to solve.

Review: I’ve never read the first novel in the series but having enjoyed the second book, I was curious to discover this one to see the new couple staged here. Indeed, as in the previous story, we once again will have two characters who deal with supernatural problems.

Spider was hired by her boss to take care of his house and his animals (you know, the talking animals we see in book 2), but she is not very good at that, oh no, because they make her crazy every time they can. She would in theory only have to manage them, but of course it’s not all because the neighbor (who is damn sexy) investigates her bosses to see if they are scammers. But even if it was only that because Noah is haunted by a ghost that no one knows about and who seems to manifest herself a lot more lately. And this ghost seems determined to want justice by telling her story, even if the way is not the most relevant.

Emma (Spider) didn’t have an easy life so far and just left her boyfriend who had become a little too obsessive. She now hopes to live free and independent as she has always wanted even if by being the daughter of the chief of police, a lot of people look after her security. It was pretty fun also to see her in some situations. On the other hand we have Noah, quite a pragmatist who does not understand what’s going on in his house but who falls in love with his neighbor when he meets her. This will also open his eyes to many things. Together they will investigate the supernatural apparitions to try to understand what exactly is happening. I liked to know more and I was curious to understand the truth about this ghost story. But of course, a link will appear between the two and even if they’re marked by their past and fear for a new relationship, it was very interesting to see how they fell for the other. I found that even though their relationship is finally quite fast, the author succeeds very well to present a credible and touching story to the reader.

I also admit that I did not expect at all for this purpose and that culprit, I did not see it coming and I loved being surprised at this point. By cons I’m curious to see if we will learn more about Paul, the ex-fiance of Spider as he is quite strange and obsessive with his actions. It was certainly a pleasant and light read, fun to discover. I wonder if the next couple being featured will be about Connor.

19 thoughts on “Spirited Away by Angela Campbell”