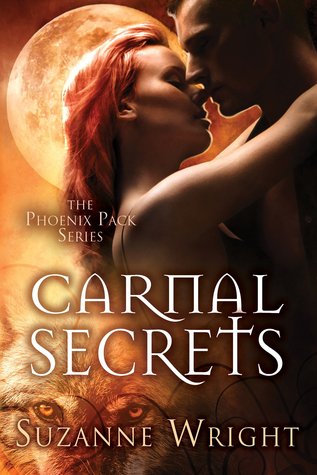 Synopsis: A pack Alpha and his estranged, true mate wrestle with painful secrets, ruthless enemies, and their own irresistible attraction, in the sexy third book of the Phoenix Pack series.

Half-shifter Shaya Critchley may hold a submissive role in her pack, but she’s done taking orders. After her Alpha wolf mate refused to claim her—but committed to interfering in her life—she took off. Now she hides from him, posing as a human in a town full of anti-shifter extremist groups. She thinks he’ll never find her again, and that suits her just fine. But she’s wrong.

Nick Axton can barely control his feelings for Shaya, but he could never claim her—not if he truly cares for her. The degenerative brain condition he keeps secret would ultimately leave her with a burden rather than a mate. But when Shaya runs away, Nick can’t bear the thought of never seeing her again. After tracking her down, he discovers Shaya’s feisty and passionate side in the process…a side he’d never seen before.

Under the menacing gazes of territorial local packs and violent human extremists, Nick vows to finally claim the spirited Shaya…and despite her initial resistance, Shaya just might find his fiery determination to be the ultimate aphrodisiac.

Review: I loved the first two volumes and I was really excited to be able to discover this third novel featuring Shaya and Nick. Oh, I must say that I was curious to see what our two characters would become after the end of the second volume. Oh yes, because their relationship is really not simple, and they will have to overcome many obstacles to create something together. Besides, I think I can say that this volume is one of my favorite in the series and I had a great time with the story and the characters.

Rejected by her soul mate, but monitored at all time, Shaya can not live her own life, and she therefore decides to run away from her “family” to live among humans. Yet she did not expect that Nick finally realizes that he can not live without her and so finds her after looking for 6 months. And what an explosion when they find each other! Yes, because Shaya is determined to make him understand that she will not return with him after what he did to her, while Nick is determined to make her succumb and understand that he will never leave her again!

I loved to see them turn around each other, to see their verbal jousts and to discover their vulnerability. Our two characters are both wounded by life and must manage their past, and the consequences on the present. Shaya isn’t a confident person and her relationships with people are quite delicate. Also, she does not trust Nick, present to get her back. Will she survive a second time if he leaves again? I loved seeing her resist, trying to understand whether it is worth it, if the story he is trying to sell, is true. I must say that Nick asked for it after all he made her go through. Yet at the same time, we would like her to give him a chance, to open up to him and her to see if she can be happy. Nick, as well as our heroine, hides many secrets and it is true that I could not wait to see the reaction of the young woman when she would learn the truth. So no, their story is not an easy one but it is precisely what is interesting to discover! I was very touched by the two characters, their problems, their doubts, their hopes and desires. Their relationship begins with a very light link but it is slowly changing without being pressed, which is a real pleasure.

But their relationship even if at the center of the history is not everything. Nick will have to confront the demons of his past coming back to haunt him once again. In addition, some people are radicalized to eradicate shapeshifters and it seems that the time has come for them to act. Something else? Some wolves disappear and nobody seems to know who the responsible is and what actually happened. In addition to this, many characters are added like Trey, Taryn and even Greta! Oh how I love our three characters and it was a real pleasure to see them here again.

So it was again a very good book and I’m still curious to read more.