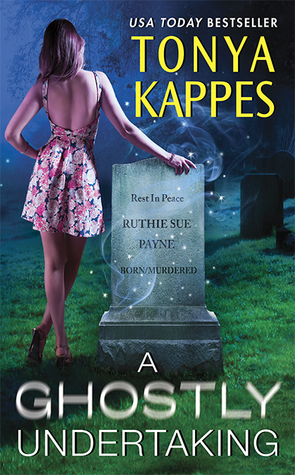 Synopsis: A funeral, a ghost, a murder…it’s all in a day’s work for Emma Lee Raines…

Review: I was immediately attracted by the cover and I admit that I took the book before reading the synopsis. But how not to be drawn to it? A heroine working for a funeral company, humor and ghosts that are determined to haunt her until she helps them? Yes? Are you intrigued? I knew it! So as you can imagine, I spent a good time with this first volume and I’m curious to read more now.

Emma had an accident some time ago and has since hallucinations or at least that’s what she believes. Yes until a new death occurs and Ruthie, the old lady that she is preparing for the funeral, materializes before her. Now, Emma realizes that she is not crazy in fact but that does not change how people look at her. So of course everyone is watching her and everyone is asking many questions about her sanity when she talks to herself. So yes excuses rife as to why she seems taken into animated conversations all by herself. But specifically back to the story, Ruthie has just died, but she knows she was murdered and she wants Emma to find her murderer. Alas, our heroine is far from being an investigator, but she remains determined to help the old lady, especially when the only suspect of the story is Granny, Emma’s grandma. Taking things in hand, the young woman will ally with the sheriff of the city to discover the real culprit! Jack is the only person who believes in her gift and this story could link them together.

I enjoyed exploring this story, it is fresh and full of ideas. I always appreciate a ghost novel, and it was very nice to read this one. Although this is not really complicated, it was interesting to follow the Emma’s adventures and to try to understand with her who was the person responsible for the Ruthie’s death. It’s pretty funny to see the relationship between our two heroines changing along the course of the story while they were not really close at the start. Through her investigation, Emma will find out more about her grandmother, things she did not expect elsewhere. I admit that the murderer was also a surprise for me because I didn’t get a name for the culprit and I agreed with Emma’s assumptions. But that’s not all because it was also quite touching to see her with Jack without understanding what he really wanted. But their relationship slowly evolves with the chapters and I’m curious to see what will happen for the future.

So it was a good introduction to this series and I’m now curious to read the second volume.

29 thoughts on “A Ghostly Undertaking by Tonya Kappes”