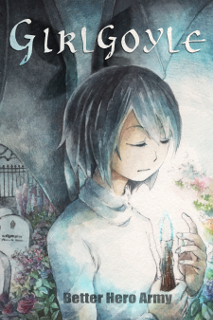 Girlgoyle – Better Hero Army
Tiffany Noboru has just awaken from her death, only to be drafted into the Gargoyle Ghost Hunter Corps. Soon she is fighting jealous rivalries within her own ranks, struggling to unravel the mystery of her recent death, and trying to avoid being killed a second time by a maniacal ghost named Bones who is seeking the destruction of the gargoyle world.

In this full-length novel, appropriate for teens and young adults, a new twist on the role of gargoyles is imaginatively brought to life in spellbinding fashion. Woven in are twenty original works of art by Miimork, which breathe life into its ghostly pages.