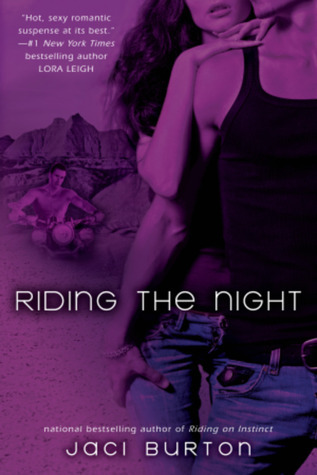 Synopsis: AJ and Pax are undercover operatives for a government agency of bad-boy bikers known as the Wild Riders. While AJ is visiting Teresa, a high school sweetheart, a fight erupts in her bar between two biker gangs. One man is left dead and Teresa’s brother is wrongly accused of murder. With no proof and Teresa as the only eyewitness, AJ, Pax, and Teresa point their Harleys toward the annual bike rally in South Dakota in hot pursuit of the real killer, and Teresa discovers a passion that brings both men to their knees.

Review: I was able to discover Jaci Burton with her sport romances that were pretty cool to read ver even though it’s true that I had a little more trouble hanging on the last ones I tried. When I saw that she had launched a biker series, I confess that I was curious to see how it was. Well I started directly with volume 4 without reading the previous volumes, but I warn you right away that there is no problem by starting with this one.

This novel features AJ and Pax, two federal agents on a holiday vacation to AJ birthplace. But well, something that should be about resting will not really be like that. In fact, while AJ finds his childhood girlsfriend in a bar and when the old feelings resurface, a fight breaks out. The problem is that a murder is perpetrated during this confrontation and the brother of Teresa is accused although she claims his innocence and explains to have seen the killer. From there, the three will team up to discover the truth about the events to save Joey.

Well, here’s the intrigue part, but it’s true that this side is put rather to the background. This is not necessarily always the case for this kind of story, but romance is finally very central here. I confess that this is what caused me a little more trouble … When I read the synopsis, I thought that we would have a love triangle and even though I know that many are scared about it, even if it is not something that particularly disturbs me. But this is not a triangle and it is rather a three-way plan. I think that’s where things began to be difficult for me … It’s not necessarily the kind of romance that I adhere to. And it is true that some scenes have rather made me laugh. Yes, because when it’s not together, it’s one after another and boy, it’s true that Teresa does not risk getting bored. I kind of stumbled on something I felt like an inconsistency. Indeed, after being raped 5 years ago, Teresa initially struggles to open up to men, even for a single contact, which I understand perfectly. But very quickly it goes to the extreme and I confess that I found it quite surprising. But maybe it’s only my feeling.

I admit that I still wondered how this type of couple could work over time, for marriage, for children, a little for everything. In short you will have understood it was not necessarily a novel for me …

20 thoughts on “Riding the Night by Jaci Burton”