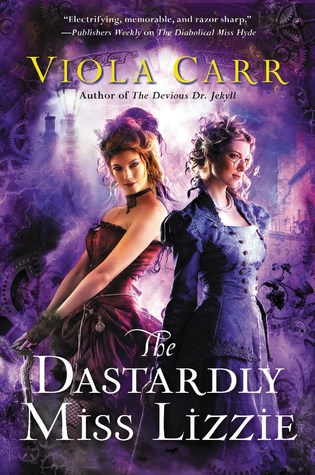 Synopsis: Being two people in one body isn’t easy. Metropolitan Police crime scene physician Eliza Jekyll is trying to maintain a semblance of control, even as her rebellious second self, Lizzie, grows increasingly wild—threatening the respectable Eliza’s reputation and her marriage to Remy Lafayette, the Royal Society investigator and occasional lycanthrope. With England on the brink of war, Remy’s away in sorcery-riddled Paris on a secretive mission that grows ever more sinister. Has he been an enemy agent all along? Or is coping with her secret divided self finally driving Eliza mad?

Eliza needs her mind clear and sharp if she’s to catch an evil genius who is killing eminent scientists. The chase uncovers a murky world of forbidden books, secret laboratories, and a cabal of fanatical inventors whose work could change the world—or destroy it—and who may hold answers to Eliza’s mysterious past.

As sorcery-wielding terrorists attack London, Eliza discovers her own enemies are closing in, driving her to desperate measures—enlisting the aid of the wily, resourceful, mercurial Lizzie—to thwart the killer. But Lizzie’s got her own life now, and true to her nature, will resort to the devious and diabolical to keep it. Even if it means throwing Eliza to the wolves, and letting the world burn. . . .

Review: I really liked the first two volumes and I confess that I was eager to see Eliza and Lizzie again to discover more of their adventures. I can tell you that once again Viola Carr charmed me!

We find our dear Eliza on a new case. Indeed, it would appear that scientists are targeted and that no one really wants to reveal what they were working on. Yet the murders continue and Eliza is going to have to do everything to understand what is going on exactly. Yet nothing will be simple, especially when some of these researchers are part of her past and remind her of the things she seems to have forgotten. On top of that, Lizzie is increasingly strong and determined to be the only one to stay. A fierce inner fight there begins between the two young women … But it’s not over because Hyde seems to have lost his mind… So while he is himself accused of murder, the two young women will have to try to understand what is going on. And then we have Remy who also seems more and more attracted by his dark side as their wedding approaches and that he leaves in France for a secret mission.

As you can see, there’s a lot going on in this novel and I can tell you that it’s impossible to get bored. We also see the return of a character whom I didn’t expect and I confess that it was a real pleasure for me. Thanks to this survey we learned a little more about Eliza and Lizzie and it was fascinating to be able to discover some pieces of her past.

Yes, I had a great time with this new novel that I read in one go! I am really curious to see if we will have more because it is always a pleasure to find all the characters!

30 thoughts on “The Dastardly Miss Lizzie by Viola Carr”