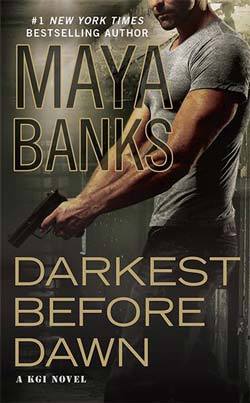 The enigmatic Hancock has been both opponent and ally to the KGI teams for as long as they’ve known him. Always working a deep game, Hancock’s true allegiance has never been apparent, but one thing is for certain—he never lets anything get in the way of duty.

But now, his absolute belief in the primacy of his ultimate goal is challenged by a captive he’s been ordered to guard, no matter how much she suffers in her prison. She’s the only woman who’s ever managed to penetrate the rigid walls surrounding his icy heart, but will he allow his perplexing feelings for the beautiful victim to destroy a mission he’s spent years working to complete or will he be forced to sacrifice her for “the greater good.”

Review: I’ve heard a lot about Maya Banks and her novels, but I never read one of them. I finally had the opportunity to do it with “Darkest Before Dawn”, volume 10 of the KGI series.

I confess that I did not expect to find myself in such a difficult environment at the beginning of the story. Indeed, we discover Honor, a young woman who volunteers in an area at war to help people survive. But then, after an attack, and the death of all her colleagues, she finds herself buried under a rubble. Succeeding finally to escape, she will find herself persecuted by the terrorists until she falls on Hancock … What she does not know is that he is not there to save her but to guve her to those who seek her in order to trap and kill the leader of the terrorist organization.

I confess that I easily got into the story and I even shed a few tears at the beginning, seeing with horror what Honor went through. I waited impatiently for Hancock to change his mind, to help her and leave her alone, but this turnaround never semmed to happen. Honor is quite impressive and I admit that her courage is admirable although I think it is a little too much sometimes. She forgives too much, easily accepts the events and I had trouble finding it very credible.

In any case, I had a good time with the novel. I’m glad I discovered the author. I did not necessarily have big problems beginning with volume 10, but it is true that I would have liked to be able to locate all the characters a little better at the end of the story.

19 thoughts on “Darkest Before Dawn by Maya Banks”