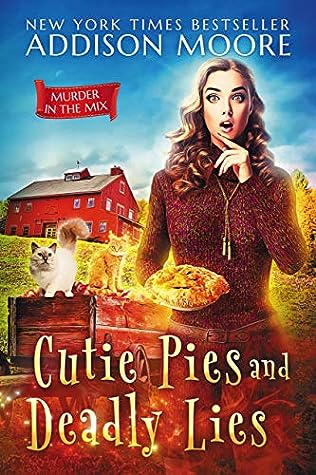 Murder in the Mix, Book 1

Synopsis: A baker who sees the dead. One too many suitors.
And a killer. Living in Honey Hollow can be murder.

My name is Lottie Lemon and I see dead people. Okay, so I rarely see dead people, mostly I see furry creatures of the dearly departed variety, aka dead pets.

And for some reason those sweet, fluffy albeit paranormal cuties always seem to act as a not-so-great harbinger of deadly things to come for their previous owner. So when I saw that sweet orange tabby twirling around my landlord’s ankles, I figured Merilee was in for trouble. Personally, I was hoping for a skinned knee—what I got was a top spot in an open homicide investigation. Throw in a hot judge and an ornery detective that oozes testosterone and that pretty much sums up my life right about now. Have I mentioned how cute that detective is?

Lottie Lemon has a bakery to tend to, a budding romance with perhaps one too many suitors and she has the supernatural ability to see dead pets—which are always harbingers for ominous things to come. Throw in the occasional ghost of the human variety, a string of murders and her insatiable thirst for justice and you’ll have more chaos than you know what to do with.

Living in the small town of Honey Hollow can be murder.

Review: After seeing some nice reviews on this series, I took the first volume with pleasure. I was expecting the ghost story and of course a paranormal cozy mystery, but I must admit that I was surprised because the paranormal side is very, very light. It’s not a problem no, but in the end it’s a bit like it’s non-existent. But I love cozy and I had a very good time with this first volume.

Lottie Lemon’s having a bad day! After an unfortunate fall on a very sexy man (who happens to be the judge of a case where she will be judged), she is assigned to court by her owners and has to move out. However, things get even worse when she discovers that one of her owners has been murdered and becomes the number one suspect in the case! And then, it seems that the sexy judge is just appearing, just like Noah, that private detective who seems to hide some secrets.

I had a good time with this novel and it was very nice to see what really happened with the murder. What about Noah and Mr. Sexy? I was a little afraid of a love triangle, or at least I expected it, because both made me want more, but in the end this is not really the case even if I don’t know how the story will turn out. In any case, I am very curious to learn more about them.

It was a good survey, a good first volume, and I’m quite curious to read the rest now!

8 thoughts on “Cutie Pies and Deadly Lies by Addison Moore”