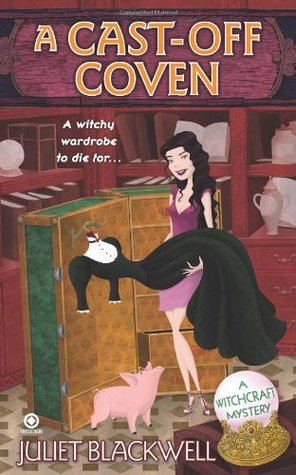 Synopsis: Students are spooked at the San Francisco School of Fine Arts, and Lily is called in to search for possible paranormal activity. In return she’s been promised a trunkful of Victorian-era clothes recently discovered in a school storage closet.

But Lily finds something else: the body of a wealthy patron of the school. In between running the store and seeing her new boyfriend, Max—a “mythbuster” who is uncomfortable with her witchcraft—she uses her sleuthing skills to try to solve the murder. Soon Lily senses something from the school’s vintage clothes, but it’s not the smell of mothballs—it’s the unmistakable aura of evil intent.

Review: I had a good time with the first volume and, being in the mood for a paranormal cozy mystery story at the moment, I gladly threw myself into this sequel.

Lily finds herself mixed up in a new story! While she’s picking up clothes at a school, a man is found dead. Was it a suicide? Was it a murder? Or did the ghost at the school, as everyone thinks, pushed him? So when Aidan asks her, to repay her debt, to find out who the murderer is and what happened, our heroine can’t say no. But she soon realizes that this story is much more complicated than she thought and, more importantly, she wonders more and more about Aidan and his motives.

I had a great time again with this second volume. I love following Lily and I was curious to see what our heroine was going to do. We also learn a little bit more about the story of Max and his wife, and I have to admit, I wasn’t expecting this. And of course, there’s Oscar the Pig, even if I’d like to understand a little more about his relationship with Aidan.

You understand that I had a good time and I ordered the sequel as soon as I finished the book.

8 thoughts on “A Cast-Off Coven by Juliet Blackwell”