As Howard Waldrop told my Clarion Workshop class, “Writing is hard.” It takes time and energy, and in all but a few instances that everyone can name, it doesn’t pay very much for that hard work.

So, there’s a tension for writers: we choose to write as a form of self-expression, but if we want to do it for a living, we’ll face a lot a pressure to write to a mass audience and partially mask ourselves.

My latest novel, Border Crosser, is for me a work of radical self-expression. Not that it’s about me though. It’s the story of Eris, an interstellar secret agent who has borderline personality disorder with a severe emotional amnesia component and very strong anti-social tendencies. In word and deed, she is able to fight the far future analogs of our current klept-oligarchs and theocrats in ways that perhaps no one else could or should. The book is for mature audiences only, and its extreme content will not be to everyone’s taste.

The character of Eris herself is in part a fantasy of radical self-expression within my self-expressive work. She is able to do and express things that violate norms and laws. And one of the places she does this most expressively is in her art.

Before she became a secret agent, Eris was already an artist. On her canvasses, she uses bodily fluids, mutated tissues, and (in her time) quasi-illegal cybernetics which allow the viewer to feel what the subject of her art felt. She takes on the taboo subjects of her age–the collectively remembered trauma of a war that nearly ended all humanity, the ongoing yet hidden genocides across the galaxy, and her own recurring descents into self-destruction. She also works with living human tableaux, arranging the people she meets into destructive patterns.

By all appearances, she’s doing, saying, and creating exactly what she wants, when she wants. Yet she isn’t free.

Part of this is because of her secret employers and the hooks they have in her mind. But another part of it may be that most of what she says and does is part of what she calls “the Eris show”–it’s all about her. And that turns out to be a trap.

My novel then is in part about the evolution of Eris’s character. The narcissism of the Eris show becomes a show about something else: the liberation of self and others as an aesthetic rather than moral choice. The liberated are aesthetically more interesting, the enslaved are boring, and the dead (whose possibilities approach zero) are deadly dull.

Eris doesn’t become more reasonable and restrained; rather, she grows more self-determining, complex, and powerful. She gains more direction over the extremely ephemeral wants that drive her, and her wild swings of love and hate become directed to larger purposes. The Eris show grows into better art.

The themes I’ve described above fascinate me, and I felt I had to express them regardless of their broad marketability. And I had to express them now. Part of this is the politics of our moment–many of Eris’s far-future enemies are my current enemies. But another part of this is my own new awareness of how limited our time as writers is. In 2014, I had throat cancer. I’m cured now, but going through that unpleasantness made me take it to heart when my agent asked me the following question: “If you only could publish one more novel, what would it be?”

That novel has always been Border Crosser. It’s what I want to say, when I want to say it. I hope that despite its extreme content, it finds its readers.

Thank you for having me here as a guest blogger! 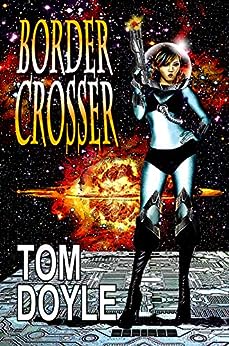 Tom Doyle’s latest novel, Border Crosser, tells the far-future adventures of Eris, a psychologically extreme secret agent whose shifting loyalties cause chaos wherever she goes in the galaxy.

Tom is also the author of the contemporary fantasy American Craft trilogy from Tor Books. In the first novel, American Craftsmen, two modern magician-soldiers fight their way through the legacies of Poe and Hawthorne as they attempt to destroy an undying evil–and not kill each other first. In the sequel, The Left-Hand Way, the craftsmen are hunters and hunted in a global race to save humanity from a new occult threat out of America’s past. In the third book, War and Craft, it’s Armageddon in Shangri-La, and the end of the world as we know it.

Tom has survived Harvard, Stanford, and cancer, and he writes in a spooky turret in Washington, DC. He is an award-winning writer of short science fiction and fantasy, and you can find the text and audio of many of his stories on his website (see links above).