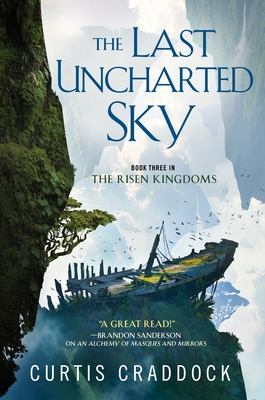 Synopsis: Isabelle and Jean-Claude undertake an airship expedition to recover a fabled treasure and claim a hitherto undiscovered craton for l’Empire Celeste. But Isabelle, as a result from a previous attack that tried to subsume her body and soul, suffers from increasingly disturbing and disruptive hallucinations. Disasters are compounded when the ship is sabotaged by an enemy agent, and Jean-Claude is seperated from the expedition.

In a race against time, Isabelle must figure out how to ward off her ailment before it destroys her and reunite with Jean-Claude to seek the fabled treasure as ancient secrets and a royal conspiracry threaten to undo the entire realm.

Review: I had had a very good time with the first two volumes and I was curious to discover this third part!

We find here with great pleasure Isabelle and Jean-Claude, two characters we love! Our two heroes embark on a new mission, and our dear Isabelle is the captain. But she also has to deal with the incessant voices in her head, which is far from simple. Facing new problems, she will meet Rebecca, a young girl who hides many secrets and who could be much more than she seems to be.

It was again a very good novel and as I said, I loved finding the characters and the universe again. Jean-Claude and Isabelle will be separated in the course of the story, but they will do everything they can to find each other again.

The author had a lot of original ideas with this novel and it’s really a series that I recommend!

6 thoughts on “The Last Uncharted Sky by Curtis Craddock”